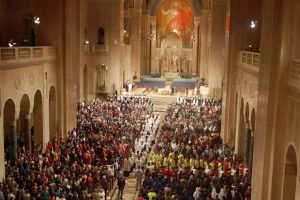 Even “banging on the doors of the basilica after they were locked out,” according to one seminarian. Can you imagine experiencing such bold, targeted and immediately threatening behavior during Mass in the U.S.?  The Basilica of the National Shrine of the Immaculate Conception has confirmed that protesters led by the Native American activist Nathan Phillips attempted to disrupt the celebration of Mass on the evening of Jan. 19.

On Jan. 23, a spokesperson for the Washington, DC basilica released a statement to CNA confirming the previously reported events of Saturday night.

The statement said that while Mass was being celebrated, “a group of approximately 50 individuals attempted to gain entrance to the basilica while chanting and hitting drums.”

The statement clarified that the protesters attempted to gain entrance to the basilica during the celebration of a specially arranged Mass being celebrated at 7 p.m, and not, as had previously been reported, during the basilica’s regularly scheduled 5:15 p.m. Mass.

“At this time, Mass was being celebrated in the upper church where the individuals attempted to enter,” the statement said.

According to video footage of the event and eye-witness accounts, the group assembled across the road from the shrine before setting off toward its main entrance, chanting and playing drums.

As the group walked towards the basilica steps, one demonstrator can be heard saying “I’ll watch the cops.”

Video of the event posted on Facebook shows one demonstrator telling the protesters they had been ordered off the shrine property by police, after some of their group were rebuffed as they attempted to enter the church.

A California seminarian present at the shrine during the demonstration told CNA that protesters could be heard “banging on the doors” of the basilica after they were locked out.