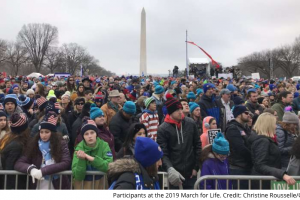 CNA and CBJ—A wave of media attention engulfed this weekend a group of students who attended last week’s annual March for Life in Washington, DC. The students, most of whom attend Catholic high schools in Kentucky, were accused on Saturday of harassing and taunting a Native American drummer, but subsequent revelations revealed a decidedly more complicated picture.

Videos began to circulate on Saturday that depicted portions of a Jan. 18 incident close to the Lincoln Memorial, in which students who had attended the March for Life were part of a confluence of demonstrators near the Memorial, some from a Washington-based religious group called the Black Israelites, and some from the Indigenous Peoples’ March, which took place in Washington on the same day as the larger March for Life.

Initially, the portions of the video that emerged, and quickly went viral, depicted a crowd of teenage boys chanting, dancing, and doing the “tomahawk chop” cheer, while a Native American man played a drum in chanted in close proximity to one teenage boy, who stood squarely before the drummer, without saying anything as the drumming and chanting continued directly in front of him.

The drummer was soon identified as Nathan Phillips, an elder of the Omaha Tribe and Native American rights activist.

Soon video, news reports, and social media surfaced that painted a picture of Catholic teens taunting Native American drummers.  Covingtong Catholic High School, local bishop and pro-life organizers were quick to condemn the alleged actions of the teens.  But it was all fake news.

The truth came out slowly, later.

The entire matter was perpetrated by Phillips, who seems to be skilled in garnering press attention with his false statements and accusations.

Upon closer examination — and calmer minds — none of the reports were true!

Video footage did not show the students attacking the members of the Black Israelite movement, who are heard to shout disparaging remarks at the students, most of them concerning the Catholic Church and Trump.

The student at the center of the firestorm, identified as Covington Catholic High School junior Nick Sandmann, issued a statement Sunday night.

Sandmann said he and his fellow students were waiting for their bus after the March for Life, when “ we noticed four African American protestors who were also on the steps of the Lincoln Memorial. I am not sure what they were protesting, and I did not interact with them. I did hear them direct derogatory insults at our school group.”

“The protestors said hateful things. They called us ‘racists,’ ‘bigots,’ ‘white crackers,’ ‘faggots,’ and ‘incest kids.’ They also taunted an African American student from my school by telling him that we would ‘harvest his organs.’ I have no idea what that insult means, but it was startling to hear.

In response to those taunts, students began chanting “school spirit chants,” with permission of a chaperone, Sandmann said. He said he did not hear students chant other things.

“The protestor everyone has seen in the video began playing his drum as he waded into the crowd, which parted for him. I did not see anyone try to block his path. He locked eyes with me and approached me, coming within inches of my face. He played his drum the entire time he was in my face,” Sandmann recounted.

“I never interacted with this protestor. I did not speak to him. I did not make any hand gestures or other aggressive moves. To be honest, I was startled and confused as to why he had approached me. We had already been yelled at by another group of protestors, and when the second group approached I was worried that a situation was getting out of control where adults were attempting to provoke teenagers.”

“I believed that by remaining motionless and calm, I was helping to diffuse the situation. I realized everyone had cameras and that perhaps a group of adults was trying to provoke a group of teenagers into a larger conflict. I said a silent prayer that the situation would not get out of hand.”

While Sandmann said that he heard protestors tell the students that he had “stolen” Native American land and should “go back to Europe,” he urged calm from his fellow students.

“I never felt like I was blocking the Native American protester. He did not make any attempt to go around me. It was clear to me that he had singled me out for a confrontation, although I am not sure why.”

“I was not intentionally making faces at the protestor. I did smile at one point because I wanted him to know that I was not going to become angry, intimidated or be provoked into a larger confrontation. I am a faithful Christian and practicing Catholic, and I always try to live up to the ideals my faith teaches me – to remain respectful of others, and to take no action that would lead to conflict or violence,” Sandmann said.

The student said that he had provided his account to the Diocese of Covington.

After a fuller picture of events emerged, many media and Catholic figures apologized for their initial characterization of the event, with some admitting they had made judgments without sufficient information.

The March for Life tweeted Sunday night that “Given recent developments regarding the incident on Friday evening, March for Life has deleted its original tweet and removed our statement on this matter from our website. It is clear from new footage and additional accounts that there is more to this story than the original video captured.  We will refrain from commenting further until the truth is understood.”

The Diocese of Covington has not indicated what the next steps will be in its investigation of the matter.

CNA attempted to contact the Diocese of Covington and the Archdiocese of Louisville. Neither was available for comment as of press time.