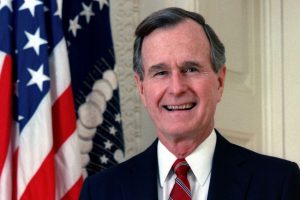 George H.W. Bush, who died late Friday, served as a fighter pilot in World War II, head of the CIA, vice president under Ronald Reagan, and as the 41st president of the United States. But he maintained throughout his last years that his most important role was that of a father of six.

“I can honestly say that the three most rewarding titles bestowed upon me are the three that I’ve got left: a husband, a father and a granddad,” Bush said in 1997 at the opening of his presidential library in Houston.

In the days following the president’s death, Catholics around the country remembered the 41st president for his character and family values.

Cardinal Daniel DiNardo, president of the U.S. bishops’ conference and Archbishop of Galveston-Houston, offered prayers for the former president and for his family, and praised Bush as a “courageous man, dedicated leader and selfless public servant.”

As a congressman, Bush represented Texas’ seventh congressional district, which is within DiNardo’s archdiocese.

“President Bush’s career in the public eye – from the Lone Star State to the global stage – was marked by incredible statesmanship and honor,” DiNardo said in a statement released by the archdiocese.

“His strong faith in God, devotion to his wife of 73 years, the late First Lady Barbara Bush, and his boundless love for the covenant of family served as a model for all to follow. The City of Houston was very proud to call him one of our own and one of our brightest points of light. We will forever be grateful for his presence and commitment to our community and to the people of Houston.”

Bush’s marriage to Barbara, who died earlier this year, was the longest marriage in the history of the American presidency.

In his speech at the 1992 Knights of Columbus convention, President Bush, an Episcopalian, spoke of the importance of character and morality in American society.

“I think my parents were like yours: They brought me up to understand that our fundamental moral standards were established by Almighty God. They taught me that if you have something for yourself, you should give half to a friend. They taught me to take the blame when things go wrong and share the credit when things go right. These ideas were supported by society,” he told the Knights.

Joseph Cullen, a spokesman for the Knights of Columbus, told CNA that Bush had “a wonderful feel for what makes America great: her people and their individual communities, including faith communities.”

“He knew that religious liberty produced varied and wonderful fruits, especially in the areas of charity and service. He knew us at the Knights. He encouraged us and did so personally at two of our conventions, including in 1992 as president. We are grateful to have known him and now pray for him and his family” Cullen said.

Bush noted in 1992 that there was a “disturbing trend” in “the rise of legal theories and practices that reject our Judeo-Christian tradition.”

“The President should set the moral tone for this nation,” Bush said.

Other bishops and Catholic voices have issued their own tributes to the 41st president.

“A gracious and humble man who lived a life of service to others, President George H.W. Bush is remembered as a man of character, a husband and father who did his best to bring about a kinder and gentler nation.  He guided our country during difficult times with grace, dignity and courage,” Bishop Nelson Perez of Cleveland said Dec. 1.

“He will be remembered for his integrity. A man of faith and humility, may he be at peace with the Lord he served in life,” Deeley said.

Later that year, the president went on to say, “Saint Ignatius said, ‘Work as though all depended upon yourself,  and pray as though all depended on God.’ The practice of that motto conquered communism. Ceaseless prayer and tireless work halted the cold war and spared us from the catastrophe of a third world war. Believers behind the Iron Curtain defied persecution; believers in the West defied indifference.”

Bush met with Pope Saint John Paul II in Rome twice during his presidency. Though the two leaders disagreed over the U.S. military intervention in the Gulf War, Bush described his last presidential meeting with John Paul II as “major tour d’horizon, touching on all the trouble spots”  in the world.

When Bush first entered politics as a Republican Congressman, he supported funding for Planned Parenthood, however he went on to be an effective pro-life president. Bush used his power of veto to stop 10 bills with pro-abortion provisions, according to the National Right to Life Committee.

Bush’s funeral will be held at Washington’s National Cathedral on Wednesday, Dec. 5 with President Donald Trump and his wife in attendance.