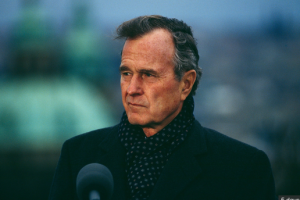 George H.W. Bush on Death, the After Life and Almost Dying in World War II

We at Catholic Business Journal felt that TIME magazine culled one of the most compelling, short video compilations—using only President George H.W. Bush’s quotes and images—that capture well the driving principles, faith and motivation behind the U.S. President we honor this week in his death.

But his entire future — including becoming president — was threatened in 1944, when Bush was just 20 years old and serving as a flying officer for the Navy during WWII, according to biographer Jon Meacham, who…. Read More>>