The Philadelphia Inquirer, CNA, CBJ—Archbishop Charles Chaput has been a diocesan bishop for 31 years. For most of that time, his people have known where to find him on Sunday afternoon or evening: Hearing confessions and offering Mass at Philadelphia’s Cathedral Basilica of Sts. Peter and Paul.

In the glowing Cathedral, Archbishop Charles Chaput’s voice echoed over the murmur of his congregants as he led them in reciting the Ten Commandments.

“See, you did pretty good!” he said after the 10th. “I bet if I had asked you to say it by yourself, you would’ve gotten through it.”

The message was, perhaps, symbolic: Sunday evening was the last time in 8½ years that Chaput would lead the faithful in prayer — the last Mass he would celebrate as Archbishop of the Roman Catholic Archdiocese of Philadelphia before his successor, Bishop Nelson Pérez of Cleveland, was installed Tuesday.

In his final sermon before about 200 parishioners, the retiring archbishop left his flock with a prescription for happiness: following the commandments as a “pattern of life” that shows us “how to be good.”

In the towering Center City cathedral, people sat in nearly every pew, though overflow seating on each side remained empty. As they walked in, some said they would miss Chaput, and praised him for being humble, sweet, and caring.

“I think it’s a little sad, but I think he’s happy. I think it’s time for him to relax,” Eileen Heiler, 81, said on her way into Mass. “He’s just a loving man. He tried to do everything he could for us.”

The archbishop’s farewell drew sustained applause as he thanked the parishioners for the “wonderful gift” of their presence in his life and at his 6:30 p.m. weekly Mass.

In a homily that stayed tied to the Mass readings, characteristic of Chaput’s preaching style, the archbishop cited the second reading from St. Paul’s First Letter to the Corinthians, saying it captures his experience of ministry to the Church in Philadelphia.

“What eye has not seen and ear has not heard and what has not entered the human heart: what God has prepared for those who love him,” St. Paul wrote. “This, God has revealed to us, through the Spirit.”

Chaput thanked the congregation for “the gift of your presence in my life.”

“God bless you,” he concluded.

The archbishop described his successor Perez, until recently the Bishop of Cleveland, as “a very good man” who “will serve you well as archbishop.” 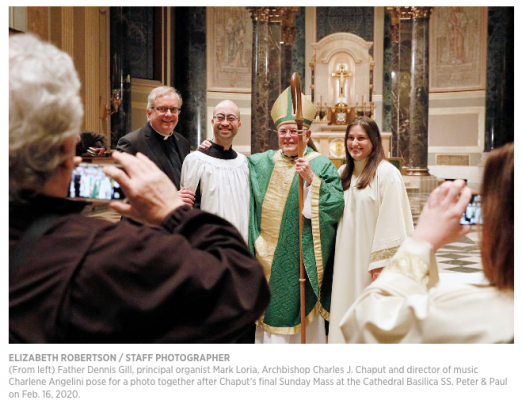 “I am very grateful to those who have supported me at this Mass,” he said, thanking the choir, cathedral rector Father Gerald Gill, and the cathedral community.

“Some of you are regular Mass attenders at this Sunday night Mass,” he said. “I’m very grateful for your presence. It really is the highlight of my week.”

“It’s hard for you to believe, isn’t it? Looking at you is the highlight of my week. I must have a very bad week,” he joked, before turning serious. “It’s been a very important part of my life, I’m very grateful to you.”

In his homily, Chaput reflected on divine law and God’s revelation.

“One of the problems with the commandments is we think of them as laws or rules. What they really are is a pattern of life,” Chaput said. “They’re not there to test us to see if we’re good, because we know we’re not, right? The commandments are there to show us how to be good.”

“We have freedom to choose whether or not to be good,” he said. At the same time, he emphasized that Christians can’t keep the commandments on their own, but must depend on God’s grace. Some struggle and sin again and again, “sometimes because we depend on ourselves rather than God.”

“Think about the most difficult (sins) for you: gossip, adultery, not to kill, not to anger,” Chaput said, stressing the importance of the commandments.

“What’s at stake here is our salvation, our eternal life, or our eternal damnation,” he added. stressing the importance of the commandments.  “You and I determine our future by what we choose: life–following the commandments—or death. Good or evil.”

On Sunday’s gospel, the archbishop warned of the “danger of scandal.”

Archbishop Chaput asked the congregation: “When’s the last time you led somebody into sin by your sin?”

As an example, he mentioned the sexual temptations facing young people who are dating, temptations through which they can lead one another into serious sin.

“It’s really awful because they’re leading somebody they love into serious sin, as well as committing it themselves,” he said. Others teach children to use foul language by their example, or lead people into “patterns of selfishness” shown by their own lives.

Not following the commandments has an impact on the lives of people who are very important to us, and can lead them away from God.

The reading from Gospel of Matthew also teaches us how Jesus sees himself, Chaput said. While the law given to Moses stresses “you shall not kill,” Jesus elevates this to say that whoever is angry with his brother will also be under God’s judgment.

“Jesus is telling us that he has authority over the commandments, and that he calls us to a greater level of obeying them than Moses called the Jewish people to,” Chaput said.

“That’s what he means when he says your righteousness must surpass the righteousness of the Pharisees. Because he calls us not only to follow the commandments literally but to apply them across the board in our lives.”

“Even though most of us don’t kill other people, all of us here are angry with others. And we can’t curse them, or say, ‘go to hell,’ and really mean it,” the archbishop said. “Jesus ratchets it up and calls us to a greater intensity in following (the commandments).”

When Jesus says a man looking at a woman with lust commits adultery, Chaput said the conclusion “isn’t that we shouldn’t go ‘that far,’ we shouldn’t go down that path at all.”

Jesus’ use of exaggerated language, such as recommending someone cut off his hand rather than sin, makes the point of the seriousness of the matter.

“It would be better for us, really, that we don’t have a hand than that we sin,” said Chaput. “And we take sin so casually in our life.”

“Does Jesus really mean we can’t divorce and remarry? Is it all that bad?” he asked, referring to Jesus’ own teaching that remarriage after divorce is adultery.

“Jesus’ words are very clear and it really seems that he doesn’t allow exceptions for any of us,” said Chaput.

Jesus does not only reject false oaths, but his call to “let your ‘yes’ mean yes” is something that “calls us to integrity and truth in our ordinary relationships, and not just when we make vows and solemn promises.”

“Jesus was very serious about the Ten Commandments and invites us to do the same,” said Chaput. “We ask the Lord to give us a love for the commandments. We don’t see them as a burden, but as a pathway to joy and peace and great happiness in our lives.”

Pope Francis accepted Chaput’s retirement and appointed his months after the archbishop turned 75, when bishops customarily submit letters of resignation to the pope.