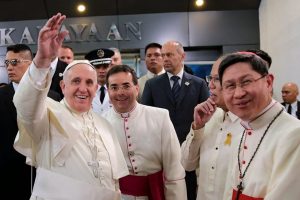 CNA/EWTN News—After the signing Saturday of a provisional Vatican-China deal on the nomination of bishops, the Vatican announced Pope Francis’ recognition of seven illicitly ordained Chinese bishops.  The decision was made “with a view to sustaining the proclamation of the Gospel in China,” according to a Sept. 22 Vatican press brief.

The pope also recognized Bishop Anthony Tu Shihua, who died on Jan. 4, 2017, but, according to the press release, “had expressed the desire to be reconciled with the Apostolic See” before his death.

The statement expressed Francis’ hope that the decision to recognize the bishops, who were ordained by the Chinese government without permission from Rome, would begin a new process “that will allow the wounds of the past to be overcome, leading to the full communion of all Chinese Catholics.”

The Catholic Community in China “is called to live a more fraternal collaboration, in order to promote with renewed commitment, the proclamation of the Gospel,” he continued. “In fact, the Church exists to give witness to Jesus Christ and to the forgiving and salvific love of the Father.”

Vatican Secretary of State, Cardinal Pietro Parolin, sent a statement commenting on the provisional agreement between the Vatican and China, saying, “today, for the first time all the Bishops in China are in communion with the Bishop of Rome, with the Successor of Peter.”

“Pope Francis, like his immediate Predecessors, looks with particular care to the Chinese People,” he noted. “What is required now is unity, is trust and a new impetus; to have good Pastors, recognized by the Successor of Peter – by the Pope – and by the legitimate civil Authorities.”

Addressing the Catholic community in China, including priests, bishops, religious, and laity, he said the pope asks, “above all, the commitment to make concrete fraternal gestures of reconciliation among themselves, and so to overcome past misunderstandings, past tensions, even the recent ones.”

Parolin said the objective of the deal is pastoral and meant to create greater freedom and autonomy for the Church in China, to aid its mission of spreading the Gospel. Signing the agreement is “of great importance, especially for the life of the Church in China,” he said.

It was also announced Sept. 22 that Pope Francis has established a new diocese in China, “the Diocese of Chengde,” as a suffragan diocese of the See of Beijing, for “the pastoral care of the Lord’s flock and to attend with greater efficacy to is spiritual good.”

Its cathedral will be the church of Jesus the Good Shepherd, which is situated in the administrative division of Shuangluan, “Chengde City.”

According to the statement the diocese’s territory will be defined by the civil boundaries of “Chengde City” and will require the modification of the dioceses of Jehol/Jinzhou and Chifeng, as a portion of each will become part of the new diocese.

The new diocese will be composed of roughly 15,000 square miles with a population of around 3.7 million. There are estimated to be around 25,000 Catholics in 12 parishes served by seven priests.