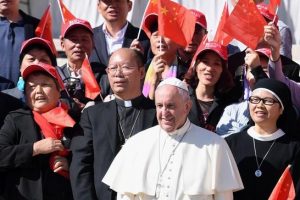 (CNA/EWTN News)—An expected agreement between the Holy See and the People’s Republic of China on the appointment of bishops was signed Saturday in Beijing, the Vatican announced. A Sept. 22 communique said that a meeting was held in which a “Provisional Agreement” was signed concerning “the nomination of Bishops, a question of great importance for the life of the Church,” and creating “the conditions for greater collaboration at the bilateral level.”

Vatican spokesman Greg Burke said the deal is the beginning, not the end, of a process of dialogue between people from “very different standpoints.”

He said the objective of the accord is “not political but pastoral” and will allow “the faithful to have bishops who are communion with Rome but at the same time recognized by Chinese authorities.”

It was signed by the heads of the Vatican and Chinese delegations: the Vatican undersecretary for Relations with States, Mons. Antoine Camilleri; and Wang Chao, the deputy minister for foreign affairs of the People’s Republic of China.

The announcement did not provide details on the content of the agreement but said it “is the fruit of a gradual and reciprocal rapprochement, has been agreed following a long process of careful negotiation, and foresees the possibility of periodic reviews of its application.”

“The shared hope,” it continued, “is that this agreement may favor a fruitful and forward-looking process of institutional dialogue and may contribute positively to the life of the Catholic Church in China, to the common good of the Chinese people and to peace in the world.”

Earlier this week, the Global Times (a newspaper tied to the Chinese Communist Party) reported that Chinese government sources have “stressed that the ongoing negotiations [between the Vatican and China] will stay on the religious level, and will not touch on any diplomatic issue such as the establishment of diplomatic ties between Beijing and the Vatican.”

Past reports on the deal have indicated the substance could be to give the Chinese government some power over episcopal appointments in exchange for bringing the underground Church above ground, ending the split with the state-sanctioned Chinese Patriotic Catholic Association.

Some of the bishops appointed by the Chinese government in the Chinese Catholic Patriotic Association also serve as members of the Chinese Communist Party’s National People’s Congress.

New regulations on religious practice in China went into effect in February 2018 that codify the increased scrutiny and pressure on religious activities in China. On September 10, the Chinese government placed further restrictions on evangelization, making it illegal for any religious prayers, catechesis or preaching to be published online. This is being enforced via the country’s extensive internet censorship.