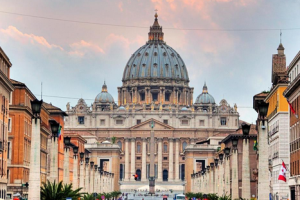 Vatican prosecutors seized documents and electronic devices in a raid executed Tuesday at the offices of the most senior curial department.

According to a statement from the Holy See press office Oct. 1, the raid was conducted at the offices of the general affairs section of the Secretariat of State. The action was authorized by the Vatican City court’s Promoter of Justice, Gian Piero Milano, and Adjunct Promoter of Justice Alessandro Diddi.

The documents and devices were taken in connection to an investigation following complaints brought last summer by the Institute for Religious Works (IOR) – commonly called the Vatican Bank – and the Office of the Auditor General concerning a series of financial transactions “carried out over time,” the statement said.

The Secretariat of State is the central governing office of the Catholic Church and the department of the Roman Curia which works most closely with the pope. It is also responsible for the governance of the Vatican City state.

Since the promulgation of Pastor bonus, Pope John Paul II’s 1988 apostolic constitution governing the organization and responsibilities of the Roman Curia, the Secretariat of State has been divided into two sections: the Section for General Affairs and the Section for Relations with States.

The deputy, or sustituto, who must be a bishop, acts as head of the Section for General Affairs, with responsibility for the day-to-day administration of governance for Vatican City, and handles all business not assigned to other curial departments. It also provides direct daily staffing service of the pope, including overseeing the facilitation of appointments within the Roman Curia, and manages relations with all foriegn ambassadors accredited to the Holy See.

As of November 2017, Pope Francis established a third section of the Secretariat, specifically to oversee the Vatican’s diplomatic corps, stationed around the world.

Cardinal Pietro Parolin has been the Secretary of State since October 2013. Archbishop Edgar Peña Parra is the current substitute. He was named to the position in 2018.