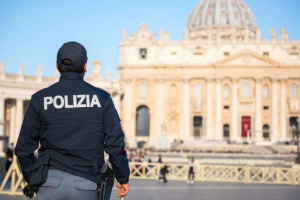 CNA—The Holy See press office announced Friday that Italian businessman Gianluigi Torzi has been arrested after he was interrogated as part of a Vatican financial investigation.

Torzi played a crucial role in the controversial purchase of a London property development by the Secretariat of State.

“Today the Office of the Promoter of Justice of the Vatican Court, at the end of the interrogation of Mr. Gianluigi Torzi, who was assisted by his trusted lawyers, issued an arrest warrant against him,” a June 5 statement from the Holy See said.

The warrant was signed by the Promoter of Justice, Prof. Gian Piero Milano, the statement said, and “was issued in relation to the well-known events connected with the sale of the London property on Sloane Avenue, which involved a network of companies in which some officials of the Secretariat of State were present.”

Torzi is being charged by Vatican prosecutors with several counts of “extortion, embezzlement, aggravated fraud and money laundering,” the Holy See said, noting that the crimes Vatican Law provides for sentences of up to twelve years imprisonment for such crimes.

He is detained in special premises at the Gendarmerie Corps Barracks.

CNA has previously reported that Torzi acted as a commission-earning middleman for the Secretariat of State as it finalized its purchase of the London property, on which it spent approximately $300 million.

The building at 60 Sloane Avenue was bought by the secretariat in stages between 2014-2018 from Italian businessman Raffaele Mincione, who at the time was managing hundreds of millions of euros of secretariat funds.

When it sold to the secretariat 30,000 of 31,000 shares in the project, Minicone’s holding company retained the 1,000 voting shares needed to control the holding company which owned the building. Mincione eventually offered to part with those, at greatly inflated prices and Torzi acted to broker the sale.

Torzi reportedly earned 10 million euros for his role in the final stage of the deal.

In May, CNA reported that Fabrizio Tirabassi, a lay secretariat official who oversaw investments, was appointed a director of a company owned by Torzi while the businessman was finalizing the Vatican’s purchase of the London property.

According to corporate filings, in November 2018 Tirabassi, who was responsible for managing financial investments for the secretariat, was appointed a director of Gutt SA, a company owned by Torzi and registered in Luxembourg.

Filings for Gutt SA with the Luxembourg Registre de Commerce et des Sociétés show that Tirabassi was appointed a director on 23 November, 2018 and removed by a filing sent on December 27. At the time of his appointment as director, Tirabassis’s business address was listed as the Secretariat of State in Vatican City.

Cardinal Parolin told CNA at the time, saying that it would not be appropriate for him to respond, “especially taking into account the ongoing legal proceedings.”

Tirabassi is one of five Vatican employees suspended in October, 2019, following a raid conducted by Vatican gendarmes, who seized computers and documents related to financial dealings at the department.

Tirabassi has not since returned to work, and it is unclear whether he remains employed. An April 30 announcement from the Holy See press office confirmed that “individual measures” had been taken against some employees in relation to the ongoing investigations, but did not specify what that might mean.

Torzi and his family were reportedly granted a private audience with Pope Francis in the Domus Santa Marta the day after Christmas, Dec. 26, 2018, as the London property deal was being finalized.

CNA has made numerous requests to the Vatican press office in recent months to clarify why Torzi was afforded this honor, and who arranged the audience; those requests have not been answered.

Torzi also has connections to the British-Italian architect, Luciano Capaldo, who is the sole director of London 60 SA Ltd., a U.K. registered holding company owned by the Secretariat of State, which controls the property at 60 Sloane Avenue in London.

Capaldo has previously served as a director of several companies at which Torzi has also served as a director, or in which Torzi and his companies have had financial interest: Sunset Credit Yield Ltd., Virtualbricks Ltd., Odikon Services Plc. At least one of these, Odikon Services, has been the subject of a lawsuit for fraud in the U.K., and suspended by the UK’s Financial Conduct Authority.

At a November press conference, Pope Francis was asked about the London investment. While confirming that he had personally authorized the October raids, he emphasized that proof of corrupt or illegal activity was “not yet clear,” before concluding that “it passed what passed: a scandal,”

“They have done things that do not seem clean,” the pope said.