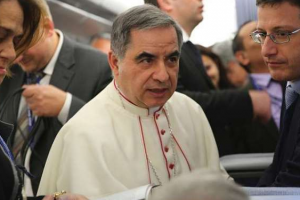 By Ed Condon and JD Flynn

CNA—The recent raid of Vatican offices is connected to an investigation into charges that Vatican money financed the development of luxury properties in London, and led to a windfall for the Vatican’s investment managers, according to an Oct. 14 report from Financial Times.

According to Financial Times, Vatican police and prosecutors are investigating the possibility of improprieties in a 2014 $200 million investment made through Athena Capital, a Luxembourg investment fund, which financed a stake in the development of a luxury apartment project in London. That investment, along with a nearly $50 million 2018 investment in the same property, has raised questions about the internal control of Vatican money held in international banks and investment vehicles, especially after repeated efforts to bring financial practices into line with international practices and standards.

The Financial Times reported that the Vatican’s 2014 and 2018 investments were authorized by Cardinal Giovanni Becciu, who was from 2011 until 2018 the second-ranking official in the Vatican’s Secretariat of State, and was in 2018 appointed to head the Congregation for the Causes of Saints.

Audit and new protocols not followed

In 2016, Becciu was instrumental in bringing to a halt Vatican financial reforms initiated by Cardinal George Pell.  Although Pope Francis had given the newly created Prefecture for the Economy autonomous oversight authority over Vatican finances, Becciu interfered when the prefecture planned an external audit of all Vatican departments, to be conducted by the firm Price Waterhouse Cooper.

Unilaterally, and without permission of Pope Francis, Becciu cancelled the audit and announced in a letter to all Vatican departments that it would not take place.

In 2017, Becciu was also responsible for the dismissal of the Vatican’s first-ever auditor general, Libero Milone.

Milone was fired in dramatic fashion by Becciu, who accused the auditor of “spying” on the finances of senior officials, including Becciu. The then-Archbishop Becciu threatened criminal prosecution of Milone if he did not agree to leave his Vatican office quietly.

Milone maintained that he was fired for being too good at his job, and because he and the reforming work of the Prefecture for the Economy were perceived as a threat to the autonomy and business practices of long-time Curial officials. He said that he was dismissed on trumped-up charges after he uncovered evidence of financial misconduct under Becciu’s leadership.

In May 2018, the Vatican quietly announced it had dropped all charges against Milone.

Also in 2017, Becciu was involved in a complicated chain of events with the Sovereign Military Order of Malta that ended with the Grand Master of the Order being deposed, and Becciu being installed as special papal envoy charged with running the order.

At the center of that controversy were allegations that Vatican financial authorities had siphoned off more than 30 million euros from a 120 million euro bequest held in a Swiss bank account, in order to ease liquidity problems.

On Oct 1, 2019, Vatican prosecutors authorized a raid within the Secretariat of State’s offices. Documents and devices were seized, though the Vatican did not indicate what exactly had prompted the investigation.

The next day, a confidential memo was leaked announcing the suspension of five Vatican employees, including two officials: Msgr. Mauro Carlino, who oversees documentation at the Secretariat of State, along with layman Tomasso Di Ruzza, director of the Vatican’s Financial Intelligence Authority.

On Oct. 14, the Vatican announced that Domenico Giani, head of the Vatican City State’s national police force had resigned, apparently because the leak of the confidential memo took place under his command. The Vatican press office said that Giani “bears no personal responsibility in the unfolding of events.”

Vatican officials have not yet commented on the Financial Times’ report.