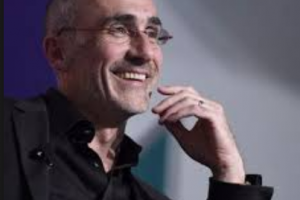 Arthur Brooks, President of the American Enterprise Institute, delivered insight and inspiration at this year’s Principled Entrepreneurship and the Dignity of Work conference in Washington D.C., and orchestrated by the Napa Institute. But I was intrigued not only by Brooks’ talk, but also by the reaction of the young Catholic professionals at our table, as you’ll see below.

Brooks was awarded the St. Thomas Aquinas Award for the Defense of Moral Truth. Tim Busch, founder of the Napa Institute, presented the award and commended Brooks for his witness as “a person out in the center of society defending the moral truth.” Busch noted that, “whether they’re liberal or conservative, everyone welcomes Arthur because he speaks with civility.”

For this talk, I found myself at a table of young professionals. Among these was Juan Pablo Segura, founder of a successful start-up called Babyscripts which offers prenatal and postpartum care and is working to transform how both doctors and patients use technology to improve the care of expectant mothers. Since Brooks’ talk was titled “How to Live a Start-Up Life,” I was particularly interested to hear Segura’s reaction.

“Arthur did an incredible job of explaining the ‘why’ of business and of work,” said Segura. While we often do things mindlessly, he continued, Brooks reminded his audience that mindful living is the first step towards sanctifying our work — and thereby sanctifying our lives.

Brooks connected this idea to our cultural identity.

As Americans, said Brooks, “We come from ambitious riff raff. And we’re proud of it. This is the only country in the world where we brag about the fact that our grandparents were nothing. We love the right to rise. We love earned success. We love that sanctified ordinary work can lead to a better life. That’s America. That’s the principle of entrepreneurship, which is a cultural principle, not an economic principle.”

An organization that is doing great work in developing this cultural principle is The Prison Entrepreneurship Program in Houston, Texas. This organization, founded by evangelical businessmen, combats the high reoffending rate which is correlated to difficulty finding work. The program gives participants entrepreneurial skills so that, upon exiting the prison system, they are ready to start their own companies.

When Brooks visited this organization, he learned of its high success rates: the re-incarceration rate of participants is below 7%, compared to the national U.S. average of almost 50%. But this success, says Brooks, is not because the majority of participants do in fact start the companies they were trained to start and run.

As it turns out, the entrepreneurial training inmates received at The Prison Entrepreneurship Program helped them to understand their lives, and this helps them to reintegrate into society.

Brooks used this story as an anchor for two practical recommendations.

First, Brooks said, if you want to be happy and live a rewarding life, you need to take more risks. He cited a study done by Steven Levitt at the University of Chicago, which examined how people make hard decisions in their lives. Participants rated their happiness on a scale of 1 to 10 before and a year after making their decision. The study found that those people who took the risk, who had said “yes” to the opportunity placed before them, were a full point higher on the happiness scale than those who had said “no.”

A start-up life, said Brooks, says “yes” to the risks: “All of us are not giving our hearts away to something. Think about the risk you are not taking. If you are going to sanctify your life which is also your work — think about that risk and say yes.”

His second practical recommendation was to use your weaknesses to make yourself truly successful.

Use your weaknesses to be truly successful

Contrary to what high school guidance counselors may tell us, said Brooks, it’s our weaknesses rather than our strengths which are in many ways the key to success.
“It’s the things that you struggle with,” said Brooks, “your vulnerabilities, the things you’re embarrassed about, that connect you with other people. And it is your connection with other people that is the true source of your strength.”

Brooks recounted how he discovered this truth.

He took an unconventional path through life. As a college dropout, a traveling french horn instrumentalist, and an eventual graduate of a correspondence school, Brooks was ashamed of his educational background until his 2013 editorial in the New York Times revealed a shift in his mindset.

“I have dedicated my life to equal opportunity,” said Brooks. “My life — my spiritual life, my professional life, my heart and soul. There’s one thing that connects me to the people on the margins of society and I’ve been denying it for 20 years. I was an elitist against myself.”

Turning to his audience, he encouraged us to examine ourselves, to find the thing in our lives which we are ashamed of. This thing, said Brooks, actually makes us more relatable to others and therefore more powerful: “Use it to connect with others. That is your vocation. You must use it. Mortify yourself. The weakness that you have will inspire others, will lift them up. And that’s why we’re put on earth –you know it as well as I do.”

Focus on the ultimate “why”

Segura saw Brooks’ talk as a call to integrate entrepreneurship within a holistically Catholic life: “Arthur challenged us to eliminate the dollars and cents limitations of business and focus on the ultimate why.”

For Segura, this “why” which was at the heart of Brooks talk was “not just our employees or our mission statement as a company.” Instead, it was “the connection that all of us can have with other people. It is the ‘why’ of our purpose in life and how that purpose can bring true meaning into everyone’s lives.”

Brooks ended his talk with a call to action. “It is the sanctification of each man and woman’s work that is the principle of principled entrepreneurship.” And if we as Catholic business leaders “can give more people this, we can save this country, along the lines that our founders envisioned, for you and me and the rest of the ambitious riff raff.”