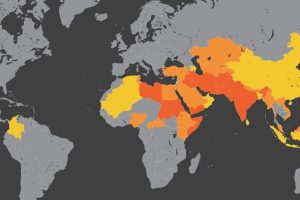 In late January 2018, Open Doors released its 2018 World Watch List (WWL), an annual ranking of the 50 countries where it is most dangerous to follow Jesus. Approximately 215 million Christians now experience high, very high, or extreme levels of persecution; that means 1 in 12 Christians live where Christianity is “illegal, forbidden, or punished,” according to Open Doors researchers. The summary provided in Christianity Today is eye-opening and well worth the read… READ MORE>>