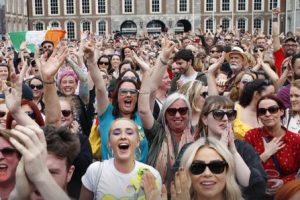 Why Ireland Voted to Annihilate Its Future, Literally

Crisis Magazine— …. On Friday, May 25, 2018, the citizens of the Irish Republic voted to remove the Eighth Amendment of the Irish Constitution, Article 40.3.3. On a turnout of just over 64 percent of the electorate, 66.4 per cent voted for repeal of the Eight Amendment while 33.6 percent opposed it. This voting pattern, with minor variations, was consistent across the country.

In a moment of insight, following a referendum in 1983, the Eighth Amendment had been inserted into the constitution to safeguard the rights of the unborn. Through it, Ireland had effectively banned abortion. The decision to remove this constitutional safeguard now opens the door to legislation, which many suspect will usher in one of the most permissive abortion regimes in the world. News of the speed with which the current Irish government wishes to enact the necessary legislation in favor of abortion is as telling as it is alarming.

The result of the referendum comes as no surprise. The political establishment—all the leaders of the various political parties, plus many within these parties, especially the opportunistic and the ambitious—mouthed platitudes about “doing the right thing.”