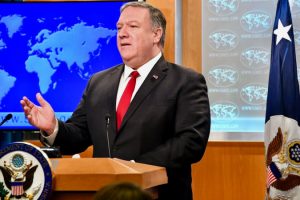 U.S. Secretary of State Mike Pompeo, in a press briefing yesterday, announced the Trump administration is expanding the Mexico City Policy to stop backdoor funding to pro-abortion organizations. Under the new expanded policy, foreign NGOs receiving U.S. foreign health assistance will be prohibited from providing funding to any other foreign NGOs that perform or promote abortion.

Secretary Pompeo also announced funding cuts to the Organization of American States (OAS) in response to the organization’s activities promoting the legalization of abortion in pro-life Latin American countries.

The Mexico City Policy is a U.S. Government policy which prohibits foreign health assistance from funding foreign NGOs that perform or promote abortion as a method of family planning. The Mexico City Policy was re-instituted by President Trump as one of his first acts as president in 2017.

The Mexico City Policy also prohibits foreign NGOs that receive U.S. foreign health assistance from providing “financial support to any other foreign non-governmental organization” that perform or promote abortion. But despite this, prior to Pompeo’s announcement yesterday, it had been the practice of the U.S. Department of State to allow foreign NGO grantees to provide funding to other foreign pro-abortion organizations.

This arrangement, in theory, would have permitted a scenario where a foreign NGO grant recipient could provide funding for organizations like the International Planned Parenthood Federation (IPPF), just so long as the funding was provided for expenses not related to abortion, such as for family planning or sex education programs.

The State Department’s new policy, however, will close this loophole…. Read More>>