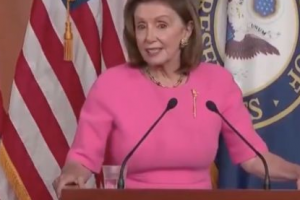 House Speaker Nancy Pelosi (D-Calif.) lashed out last Thursday against her archbishop, Archbishop Salvatore Cordileone, for his statement that the so-called Women’s Health Protection Act—the most egregious abortion bill yet proposed, that would remove nearly all abortion restrictions and strip states of any state pro-life legislation—is tantamount to “child sacrifice.”

The bill, which was approved by Congress last week, would override state abortion laws and allow for abortions in some cases throughout all nine months of pregnancy.  Pelosi has been working hard to push the bill through the House.

When asked about Cordileone’s comments at her Thursday press briefing in the U.S. Capitol, Pelosi responded that “it’s none of our business how other people choose the size and timing of their families.”

“The archbishop of the city of that area, of San Francisco, and I had a disagreement about who should decide this,” she added, noting that she had five children. “I believe that God has given us a free will to honor our responsibilities.”

Catholic Business Journal has ONE question for Ms. Pelosi:  How can you have birthed five children and not fight to protect the most vulnerable of human life, namely the unborn child in the womb, yet instead advocate so relentlessly for any unborn baby to be intentionally killed in the womb up to date of birth?

It makes absolutely no sense.