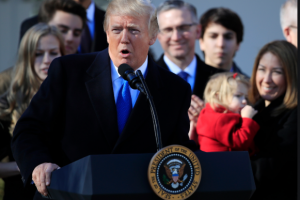 Donald Trump will be the first president ever to attend the March For Life in Washington D.C. in the event’s 47 year history. This historic decision speaks volumes about this Administration’s commitment to end abortion in this nation, even as former bastions of Christianity such as Ireland sadly embrace it.

President Trump’s attendance at this year’s national March for Life is historic.  A number of U.S. Presidents have sent a note of support or spoken words of support via video, but none have physically attended prior to this year.

“I ask every citizen of this great Nation to listen to the sound of silence caused by a generation lost to us,” said President Trump

During an election year, when so many candidates, regardless of party, shrink from any remote type of controversy on life issues unless it’s to praise abortion, here’s one man who boldly, clearly stands for the right to life of the unborn.

Half a century of pain

Each year for 47 long years the March for Life event continues to be held in Washington D.C. on or near the anniversary date of January 22, 1973 when the U.S. Supreme Court’s Roe v. Wade ruling suddenly made abortion the law of the land, despite the Constitutional mandate that only Congress — only Congress, not the Supreme Court — has the role and ability to make national laws.

The Supreme Court ruling has never been forgotten.

As President Trump said in his January 22, 2020 proclamation of January 22nd as National Sanctity of Human Life Day:

I ask every citizen of this great Nation to listen to the sound of silence caused by a generation lost to us, and then to raise their voices for all affected by abortion, both seen and unseen.

Past presidents Reagan, H.W. Bush, W. Busch and Trump have issued annual declarations each year near the anniversary of the Roe v. Wade ruling.  Presidents Clinton and Obama refused to do so during their administrations.

Each year more than 300,000 and upwards toward half a million in some years participate in the annual March For Life event to protest legal abortion as a national law. Depending on the year, participants have braced bitter cold, snow, ice and more.  But they show up anyway.  Busloads. Young people. From every state in the Union. Yes busloads of new generations, our future national leaders!

After the Rally, they walk down Constitution Avenue and in front of the White House, ending on the steps of the U.S. Supreme Court.  In protest to an unjust law and in peaceful support of the millions of unborn babies (not to mention devastated mothers and families) whose lives have been snipped short in the womb, before ever given a chance to see the light of day with newborn eyes.