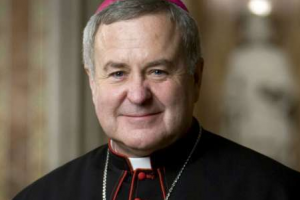 St. Louis, Mo., May 28, 2019 -CNA – Banning abortion after eight weeks of pregnancy is a “giant step forward for the pro-life movement,” Archbishop Robert J. Carlson of St. Louis said in a statement on Friday, after Missouri Governor Mike Parson signed an abortion ban into law.

Parson signed the “Missouri Stands for the Unborn Act,” which criminalizes performing abortions after eight weeks in the state, except when the life of a mother is determined to be in danger.

The law criminalizes the performance of abortions or the prescribing of medical abortions, punishable as a Class B felony, for doctors and medical professionals. It does not penalize women who obtain abortions. Class B felonies are punishable by 5-15 years in prison in the state of Missouri.

“In recognition that Almighty God is the author of life, that all men and women are ‘endowed by their Creator with certain unalienable Rights, that among these are Life’, and that…the Constitution of Missouri provides that all persons have a natural right to life, it is the intention of the general assembly of the state of Missouri to: (1) Defend the right to life of all humans, born and unborn; (2) Declare that the state and all of its political subdivisions are a ‘sanctuary of life’ that protects pregnant women and their unborn children; and (3) Regulate abortion to the full extent permitted by the Constitution of the United States, decisions of the United States Supreme Court, and federal statutes,” the act states.

The bill was passed despite strong opposition from Democrats in the state legislature, NPR reported.

“Over more than two hours of debate, Republicans and Democrats delivered forceful arguments about the bill, with Democrats – at times yelling and at other moments sobbing – attempting to persuade the body to reject the measure,” Bobby Allyn reported at NPR.

Missouri is following suit with a number of states that have recently passed signficant abortion legislation, including Georgia, which recently passed a law banning abortions after the detection of a fetal heartbeat, and Alabama, which passed a law this month outlawing all abortions, except those deemed by a doctor as necessary to save the life of a mother.

Supporters of the Missouri law have said that it differs from Alabama’s law in that it was not set up to directly challenge Roe v. Wade, but to restrict abortion as much as possible without posing a direct challenge to Roe v. Wade, according to NPR.

Save as many lives as we can, yet withstand judicial challenges

Rep. Nick Schroer (R), one of the bill’s sponsors, told NPR that the goal is “to save as many lives as we can while withstanding judicial challenges.”

“We want to get as close to the line as possible on what previous judges have thrown out,” he said.

In his statement, Archbishop Carlson said that Catholics “need to continue to show persistence and determination in proclaiming a culture of life.”

Multiple resources are available through the Archdiocese of St. Louis for women who are pregnant, or for women who have had abortions, including a downloadable brochure highlighting pro-life clinics in the St. Louis area, and retreats and counseling for post-abortive women.

“Know that the Archdiocese of St. Louis is committed to providing support, services and life sustaining education to women during and after pregnancy, especially those who may feel frightened, alone or are contemplating abortion,” Carlson said.