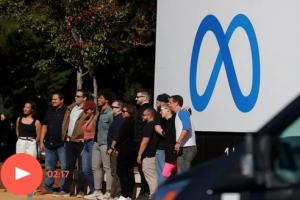 What the Heck is Metaverse? Zuckerberg’s latest master plan

The term metaverse – a combination of the prefix meta (meaning “beyond”) and universe – was coined in Snow Crash, a novel by American science fiction writer Neal Stephenson.  Facebook CEO Mark Zuckerberg’s revolutionary announcement of his Metaverse, “Meta” for short, is mind-blowing.
Below please find exerpts and links on the topic of this new beyond-social-media venture, culled from three eye-opening articles—Crisis Magazine, Vanity Fair, and—the most comprehensive—from The Guardian.  Also be sure to watch the two-minute demo video below.

Crisis mag—This week, Facebook announced plans to change its name to “Meta” and rebrand itself as a Metaverse company rather than a social media company, betting its future on the importance of this development. Facebook/Meta also announced that it is hiring 10,000 people in Europe alone to advance this project. And Epic Games announced they are putting $1 billion toward building the Metaverse.

So, what exactly is this Metaverse? In short, it will be the new version of the internet. Experts say it will not exactly replace the internet, it will just absorb it and take it to the next level—the “Internet 3.0,” according to Ronke Babajide writing on Medium.

Virtual reality and augmented reality will fully integrate with the world around us, they say, so we won’t need to look down at screens all the time (that part actually sounds pretty nice). If a friend wants to speak with us, we won’t have to read a text or an email or speak on the phone; a digital version of them—like a (article continues below video)

Princess Leia hologram in Star Wars—will emerge and simply tell you the message they wanted to deliver. If you’re hungry, maybe a character from your favorite show (whatever those will look like) would pop up and suggest you get something from the new restaurant down the street.

To navigate this world, each person will apparently need an avatar, a kind of digital representation of…read more>

…you could imagine wearing your digital avatar out in the real world, where other people who are wearing headsets see an augmented version of their reality, including you dressed up as your digital avatar, which could also change based on who is looking at you. Maybe you come across as a three-headed puppy with multicolored pigtails to your kids, but a professional in a suit to your coworkers. In this scenario, you could play a game of Pac-Man in the real world, running around trying to capture virtual coins that no one else can see, or evading multicolored ghosts who want to eat you alive. You could sit in a coffee shop in New York while a friend sits in a coffee shop in Paris, and both have a ‘real’ coffee together, even though you’re not in the same place.

The most comprehensive review of Zuckerberg’s Metaverse

The Guardian— Facebook CEO Mark Zuckerberg on Thursday outlined his vision for the future of the social media giant, formalising the company’s focus on the metaverse.

In a presentation at the company’s annual Connect conference, Zuckerberg announced the company is rebranding as Meta and detailed how his company aims to build a new version of the internet.

“We believe the metaverse will be the successor to the mobile internet, we’ll be able to feel present – like we’re right there with people no matter how far apart we actually are,” he said.

Here’s what you need to know:

What is the metaverse?

The metaverse is where the physical and digital worlds come together. It is a space where digital representations of people – avatars – interact at work and play, meeting in their office, going to concerts and even trying on clothes.

At the centre of this universe will be virtual reality, a digital world that you can already enter via Facebook’s Oculus VR headsets. It will also include augmented reality, a sort of step back from VR where elements of the digital world are layered on top of reality – think Pokémon Go or Facebook’s recent smart glasses tie-up with Ray-Ban.

Facebook already has a professional version of the metaverse under way: Horizon Workrooms, an app that lets Oculus-sporting workers enter virtual offices and hold meetings.

Indeed, Nick Clegg, Facebook’s vice-president of global affairs, holds his Monday team meetings in the office metaverse, replete with…read full article – FASCINATINGLY HORRIFYING… but God will be there too through Christians