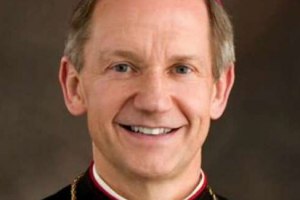 CNA—Bishop Thomas Paprocki of Springfield in Illinois issued a pastoral guide last month regarding diocesan policies on gender identity, expounding on existing policy that schools and other diocesan institutions will recognize students and adults by the biological sex with which they were born.

In the guide, Paprocki noted the need to approach the issue with compassion and sensitivity, while also adhering to Church teaching and the truth.

“Gender dysphoria is a real psychological condition, in which a biological male or female believes he or she is the opposite gender,” Paprocki noted.

“It is of paramount importance to handle such situations with gentle and compassionate pastoral skill and concern. All forms of discrimination and harsh treatment must be strongly resisted and corrected,” he said.

Families face great difficulties when they have a child experiencing gender dysphoria, Paprocki said, and he encouraged parents to help their child through their confusion without reinforcing the confusion and making their child think their problem will be “solved” with surgical or hormonal interventions.

Clarity about transgender “treatments” and more

“Such treatments, especially for children, are invasive and disruptive physically, chemically, psychologically, emotionally, and spiritually,” Paprocki said. “Fueling the confusion that families face in these circumstances is not merciful. For the sake of the family and the loved one, it is imperative to be clear on the reality of human biology as a gift from God that we cannot change.”

The bishop also noted that Pope Francis has expressed concerns with transgender ideology. In an April 2015 general audience, Pope Francis said: “the so-called gender theory is not an expression of frustration and resignation, which seeks to cancel out sexual difference because it no longer knows how to confront it. Yes, we risk taking a step backwards. The removal of difference, in fact, creates a problem, not a solution.”

Paprocki said that “The Holy Father’s concerns are grounded in the Church teaching, that our identities as male and female are part of God’s good design in Creation, that our bodies and sexual identities are gifts from God, and that we should accept and care for our bodies as they were created.”

According to diocesan policy, students and adult employees or volunteers in all diocesan agencies and activities will be referred to by pronouns that correspond with their biological sex, and will be expected to use bathrooms and other facilities according to biological sex. All diocesan records will also record the person’s biological sex.

The policy notes that it encourages counseling with a counselor who has a Christian anthropology and adheres to Catholic teaching. It adds that “the Church recognizes that appropriate medical care may be necessary in rare cases of true genetic or physical anomalies, such as hermaphroditism or intersex.”

“A person cannot change his or her gender. A person should accept and seek to live in conformity with his or her sexual identity as determined at birth,” Paprocki said.

The Church considers any medical interventions that remove or destroy healthy reproductive organs as “a type of mutilation and intrinsically evil. Procedures, surgeries, and therapies designed to assist a person in ‘transitioning’ his or her gender are morally prohibited,” he noted.

Just as anorexia is a condition in which one’s perception is separated from reality, Paprocki noted, gender dysphoria is a similar separation of perception and reality, and those with the condition should be helped to accept reality rather than their false perception of it.

“None the less, the presentation of this truth must be made with love, compassion, and patience. As the policy itself states, our schools, parishes and other institutions embrace with compassion those families and individuals with gender dysphoria and patiently supports them in their journey,” he said.

“However, it must be clear that our schools and Church institutions (including sacramental records and school records) will refer to such persons with the gender pronouns, along with bathroom and locker room use and sports activities that acknowledge their God-given biology.”

“Some families may not be willing to agree with this approach, and we need to respect their freedom; but they must likewise respect the Church’s duty to adhere to revealed truth if they are to participate actively and fully in our faith community, especially our Catholic schools,” he added.

One group that has expressed disagreement with and dismay at the policy is DignityUSA, an advocacy group “Celebrating the wholeness and holiness of LGBTQI Catholics.”

In a statement, Marianne Duddy-Burke, Executive Director of DignityUSA, said Paprocki’s pastoral guide is “perilous to the physical and mental health of transgender and nonbinary people” because it displays “a dangerous and willful ignorance of current medical and mental health standards.”

In his guide, Paprocki noted that it was not sufficient as a whole response to the growing transgender movement and the threats that it poses, but that it was “a foundation of clarity and certainty regarding Church teaching regarding human biology, sexuality, and morality.”

He urged pastors and school leaders to come to the Vicar for Priests and the Vicar General or the Superintendent of Schools for further guidance on particular situations involving gender dysphoria and gender identity.