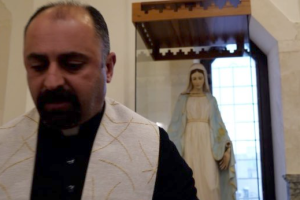 The Unending Passion of Persecuted Catholics in Muslim Lands

Crisis—For Catholics around the world, this week is Holy Week: that time where we commemorate Jesus’ final days in Jerusalem, marked by betrayal, false accusations, ignominious suffering, and ultimately death. It is a time for prayer, personal reflection, and penance, that we might spiritually commune with our Lord Jesus Christ in His Passion.

For those of us in the West, pampered by comfort and entertainment, that can be a bit challenging. Yet for other Catholics, their entire lives often seem like one unending Passion Week. I speak in particular of persecuted Catholics living (and suffering) in Muslim-majority nations.

I know something about their plight. For about seven years I have advocated on behalf of the persecuted church, especially those with whom I developed a personal relationship while living abroad. The stories of these courageous Christians, who have endured harassment, threats, kidnapping, exile, and violence at the hands of Muslim extremists, is cataloged in my recent book, The Persecuted: True Stories of Courageous Christians Living Their Faith in Muslim Lands. Alexandre Goodarzy, author of Kidnapped in Iraq: A Christian Humanitarian Tells His Story, which will be available next month, knows of these things as well.

Goodarzy, a French Catholic relief worker who traveled extensively throughout the Middle East, was kidnapped by Muslim extremists shortly after he arrived in Iraq in January 2020. The abductors threatened him and his companions, stole their possessions (including his wedding ring), and verbally and physically abused them. Having already spent extensive time in Syria during its years-long civil war, Goodarzy feared that torture, and potentially death, might soon follow. “In a place where decades of war and horror have hardened people to brutality and normalized every kind of violence, lives can be thrown away without a second thought,” he writes.

The kidnapping was not his first encounter with Muslim extremism. He knew of stories from his time in Syria. He describes how al-Qaida, in 2012 in Syria, dragged women naked through the snow and beheaded them. Islamist forces kidnapped thirteen nuns and killed priests. They placed a bomb under a bishop’s pulpit in a Greek Melkite Church, killing several people. The Islamic State systematically murdered thousands of Christians across Syria and Iraq and displaced many tens of thousands more, disrupting, if not destroying, ancient communities. Christian women (and those of other religious minorities) were forced into sex slavery by Muslim militants.

At one point prior to his kidnapping, Goodarzy also traveled to Pakistan to witness (and combat) modern-day slavery there. He visited the village of Pansara, near the city of Faisalabad, where Christian slaves worked in a brick-making factory. A local Pakistani priest told him that what he saw there was replicated in thousands of brick factories across the country, amounting to about two million Christian and non-Christian slaves across the country.

Thankfully, after about ten weeks in captivity as a hostage…  read more>>

From North Africa, across the Middle East and South Asia and into Southeast Asia in places like Malaysia and Indonesia, Christians suffer, often silently. They face poverty, restrictions on the practice of their faith, and constant pressures to… read more>>