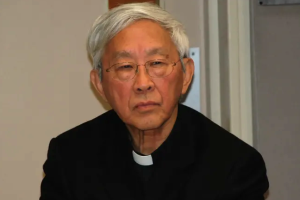 CNA—The European Parliament has called on the Vatican “to give full support to Cardinal Zen” and told the Holy See it should “strengthen its diplomatic efforts and its leverage on the Chinese authorities”.

In a resolution passed on July 7, the parliament condemned the arrest of the 90-year-old former bishop of Hong Kong by Chinese authorities and demanded that all charges against him be dropped.

Cardinal Zen was charged in a Hong Kong court on May 24 with four other prominent democracy advocates who were all trustees of the 612 Humanitarian Relief Fund, which helped pro-democracy protesters to pay their legal fees.

In the non-binding resolution passed on Thursday, the EU parliament decried the arrest of Zen as “an attack on the freedoms guaranteed in the Hong Kong Basic Law, including the freedom of religion or belief”.

The resolution also recognized the cardinal as a leading advocate for democracy in Hong Kong and instructed the President of the European Parliament, Maltese Catholic Roberta Metsola, to communicate the resolution to the Holy See as well as other institutions.

Zen was arrested by the authorities in Hong Kong on May 11 and was released on bail later on the same day. He has pleaded not guilty to charges of failing to register a pro-democracy association.

The day after Zen’s arrest by Hong Kong authorities, Vatican Secretary of State Cardinal Pietro Parolin said he hoped that the cardinal’s arrest would not complicate the Holy See’s dialogue with China.

Zen has strongly criticized the Holy See’s provisional agreement on the appointment of bishops with Beijing.

Human rights advocates this week voiced concerns after Pope Francis said the agreement was “moving well” and should be renewed.

On May 24, the World Day of Prayer for the Church in China, Zen said that the Holy See “made an unwise decision” to enter into a provisional agreement with the Chinese Communist Party government when it did.

“Martyrdom is normal in our Church,” Zen said. “We may not have to do that, but we may have to bear some pain and steel ourselves for our loyalty to our faith.”

The trial against Zen and other arrested citizens is scheduled to begin on September 19.