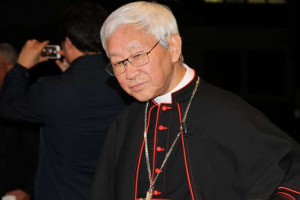 Although early morning reports today indicate the cardinal has been released on bail, this does not preclude further action by the communists.

As you may recall, Cardinal Zen has not minced words in condemning the relentless and repressive actions of Communist China as well as the Vatican’s 2018 arrangement with Beijing regarding bishop nominations.  Hong Kong’s former archbishop condemned the agreement as a sellout of the underground Church and Christians in China. (story continues below)

Cardinal Zen was seen leaving a police station in the dead of night, shortly before midnight on Wednesday, reported the Associated Press (AP).

Xi is “absolutely terrified of a 90-year old Catholic cardinal. Xi is a pathetic coward,” said Senator Ben Sasse of Nebraska, a member of the Senate Select Committee on Intelligence, in a statement. He said these actions showed the ruling Communist Party and its leader Xi Jinping were “afraid of truth-tellers and labels them threats to national security.”

Maya Wang, Human Rights Watch’s China senior researcher, said arresting Zen for his peaceful activities “has to be a shocking new low for Hong Kong, illustrating the city’s free fall in human rights in the past two years.”

Zen’s arrest marks “the darkest day to date in the Chinese Communist Party’s incremental destruction of the vitality of Hong Kong and is likely to provoke a reconsideration by the Vatican of its several-year long diplomatic engagement with Beijing over the ordination of bishops,” said Lionel Jensen, associate professor of East Asian languages and cultures at the University of Notre Dame, who helped welcome Zen to the college campus in 2019.

Cardinal Zen is not alone

Singer-actress Denise Ho, lawyer Margaret Ng, scholar Hui Pokeung and former Legislative Council member Cyd Ho Sau-lan were also arrested, although at the time of writing it is unclear if Hui Pokeung was formally arrested. Hong Kong Watch, a U.K.-based human rights group reported that Hui was arrested at the city’s international airport, thwarting his attempt to flee the communists.

“We urge the international community to shine a light on this brutal crackdown and call for the immediate release of these activists,” Rogers added.

Not highlighted in mainstream news reports, Hong Kong’s once-thriving independent media have been gutted, and its legislature reorganized to now be packed with communist Beijing loyalists.

Many—if not most or all—of the city’s “long-respected economic, religious and educational institutions, along with non-governmental organizations” have closed their Hong Kong operations, according to AP and other news reports.

Wednesday arrests also included four trustees of the 612 Humanitarian Relief Fund that provided legal aid to those quashed by communist security forces during the 2019 pro-democracy protests, even though the fund shuttered in 2021. A 37-year-old man was also cited for “failing to properly register the fund.”

Those arrested were ordered to surrender travel documents if they wish to be released on bail.

More arrests are planned, according to a police statement.