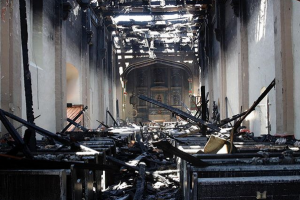 Churches and statues vandalized, burnt, attacked across US over weekend

“An act of sacrilege occurred here. That is an act of the Evil One,” the Archbishop said.

He is right. Absolutely right.

When a deadly COVID virus—one that now has several medical cures now well-proven, by the way—is used as an excuse to repeatedly extend state and local government shutdowns, destroy businesses and family livlihoods, release hardened criminals (more than 8,000 in California in the last few weeks), something is wrong.

Even worse, when trained Marxist-minded organizations and members, with the witting or unwitting help of mainstream news media and local operatives, stir up civil unrest, looting, lawlessness—even calling for eliminating police—and are allowed to run like a mindless, mad herd of stampeding cattle through our city streets destroying historic monuments, statues, and more…

And when special intensity, vitriol and hatred is directed at Christianity– including burning churches, toppling saint statues and more, there can be no doubt that the Evil One is integral to what is happening in the world right now, especially in the United States.

San Gabriel Mission—one of the 21 missions founded by Fr. Serra and his Franciscans in California— was nearly burned to the ground in California (cause yet to be determined).

Statue of the Blessed Virgin Mary was burned in Boston, MA.

Yes, we know who ultimately wins the battle. That matter was settled, thanks to the extraordinary mercy and love of God, long ago on the Cross and in the Resurrection of our Saviour.   And St. Michael the Archangel, to whom we pray for protection, defeated the Evil One among the angels.

But the battle is not yet over.  Satan roams the world still, seeking whom he may devour.

The evidence continues to roll in:

Lifesite News—Several churches and statues across the United States went up in flames or were vandalized over the weekend, including a mission church founded by Saint Junípero Serra just outside of Los Angeles almost 250 years ago.

On Saturday, a 24-year-old man was arrested and charged with attempted murder for setting fire to Queen of Peace Catholic Church in Ocala, Florida. He drove his car into the church, and proceeded to light two gallons of gasoline on fire. Parishioners were inside the church preparing for Mass, but were able to flee without injury.

“In an interview with sheriff’s Detective John Lightle, suspect Steven Anthony Shields said he has been diagnosed with schizophrenia and is not taking his medication,” reported a local newspaper.

“Shields said that what he did was ‘awesome,’ and he smiled and laughed while he was questioned at the Sheriff’s Office,” the newspaper added. “Referring to himself as the ‘king’ and saying he was on a ‘mission,’ Shields told the detective he has problems with the Catholic Church and made reference to several Bible passages, including the Book of Revelation.”

After his arrest, he told police that he “knew what he was doing. Shields added even though he knew it was wrong, he planned to…. read more>>