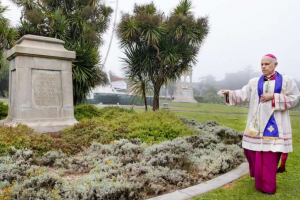 After a mob tore down statues, including a figure of St. Junípero Serra statue, in a San Francisco park, Archbishop Salvatore Cordileone was joined by several dozen Catholics Saturday in prayer and acts of spiritual reparation.

“Evil has made itself present here. So we have gathered together to pray for God, to ask the saints…for their intercession, above all our Blessed Mother, in an act of reparation, asking God’s mercy on us and on the whole city, that we might turn our hearts back towards him,” Cordileone said in a June 27 video.

The St. Junípero Serra statue was torn down in Golden Gate Park the evening of June 19 by a crowd of about 100 people. The crowd also tore down statues of Francis Scott Key, author of the National Anthem, and Ulysses S. Grant, U.S. president and Union Army general who defeated the Confederate States of America.

On Saturday, several dozen people joined the Archbishop of San Francisco to pray.

“The presence of so many wonderful people here was of great comfort for me,” the archbishop said. “I feel such a great wound in my soul when I see these horrendous acts of blasphemy disparaging the memory of Serra who was such a great hero, such a great defender of the indigenous people of this land.”

Cordileone said the statue was “blasphemously torn down”

“An act of sacrilege occurred here. That is an act of the Evil One,” he said in the video.

“So we offer that prayer, and bless this ground with holy water so that God might purify it, sanctify it, that we in turn might be sanctified,” he said, encouraging Catholics to pray, to fast and to inform themselves.

“There’s a lot that people don’t know. There’s a lot of ignorance of the real history. I’d ask our people to learn about the history of Father Serra, of the missions, of the whole history of the Church, so that they can appreciate the great legacy the Church has given us.”

The exorcism prayer Cordileone offered, the St. Michael Prayer, invokes the intercession of the Archangel Michael against the power of Satan. It is not the same as those exorcism prayers offered by the Church if a person is believed to be the subject of demonic possession.

During the eighteenth century, the saint founded nine Catholic missions in the area that would later become California, many of those missions would go on to become the centers of major California cities.

Serra helped to convert thousands of native Californians to Christianity and taught them new agricultural technologies. His statue in Golden Gate Park was first placed there in 1907. It was crafted by well-known American sculptor Douglas Tilden.

Critics have lambasted Serra as a symbol of European colonialism and said the missions engaged in the forced labor of Native Americans, sometimes claiming Serra himself was abusive.

But Serra’s defenders say that Serra was actually an advocate for native people and a champion of human rights. They note the many native people he helped during his life, and their outpouring of grief at his death.

Biographers note that Serra frequently intervened for native people when they faced persecution from Spanish authorities. In one case, the priest intervened to spare the lives of several California natives who had attacked a Spanish outpost.

In one letter urging fair treatment of native people, Serra wrote that “if the Indians were to kill me…they should be forgiven.”

Los Angeles Archbishop Jose Gomez said in 2015 that Serra had “deep love for the native peoples he had come to evangelize.”

“In his appeals, he said some truly remarkable things about human dignity, human rights and the mercy of God,” the archbishop added.

In 2017, Gomez praised Serra as an overlooked American founder.

“Junípero sought to defend the dignity of the native community, to protect it from those who had mistreated and abused it,” the pope said in his homily at the Mass of canonization. “Mistreatment and wrongs which today still trouble us, especially because of the hurt which they cause in the lives of many people.”

The legacy of the Church, Cordileone said, is “a wonderful legacy that we should be proud of. There are those who want us to be ashamed of it. We have every reason to be proud of it.”

“But also we have to approach living our Christian life with humility and to continue to give goodness to the world, and to give the world beauty and truth, with the help of the grace of God,” he said.

Power of the Rosary

“Our Lady is always asking us to pray the rosary,’” he added. “The rosary has the power even to change history”

Cordileone said Serra had a personal importance for him.

“He was someone who was very much a part of my life growing up,” said the archbishop.

“I grew up very close to the first mission he founded, in San Diego.”

The toppling of the statue made him “very distressed” and “inflicted a great wound in my soul.”

“So the presence of so many people here was of great support to me,” he said.

In a June 20 statement, Cordileone said that important protests over racial injustice have been “hijacked” by a mob bent on violence.

“St. Serra made heroic sacrifices to protect the indigenous people of California from their Spanish conquerors, especially the soldiers,” he said. “Even with his infirm leg which caused him such pain, he walked all the way to Mexico City to obtain special faculties of governance from the Viceroy of Spain in order to discipline the military who were abusing the Indians. And then he walked back to California.”

In 2018, San Francisco’s city government removed a statue of the saint from a prominent location outside City Hall. Stanford University’s Board of Trustees recommended to rename some, but not all, features on campus named for the priest. The student government had said the Catholic missions had a harmful impact on Native Americans.

A statue of the saint remains displayed in the U.S. Capitol.