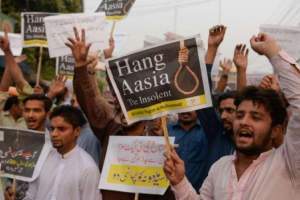 CNA—Nov 8, 2018—Pakistani Catholic Asia Bibi was released from prison and moved to Islamabad late Wednesday as her family seeks asylum due to the riots and death threats following her acquittal of blasphemy charges.

The mother-of-five had spent eight years on death row in Pakistan on blasphemy charges after she was accused of making disparaging remarks about the Islamic prophet Muhammad.

Until yesterday, Bibi remained in prison one week after Pakistan’s Supreme Court acquitted her charges Oct. 31, which sparked protests by Islamic hardliners who called for her to be hanged.

Bibi’s husband, Ashiq Masih, has appealed to several Western countries for asylum for their family. The Italian Deputy Prime Minister Matteo Salvini said said Tuesday that he would do “everything humanly possible” to help secure Bibi’s safety in Italy or another European country.

Alessandro Monteduro, director of Aid to the Church in Need Italy, has served as an intermediary with the Italian government in the Bibi family’s appeal for asylum in Europe.

“They want to leave Pakistan as soon as possible,” Monteduro told CNA Nov. 7 after speaking with Bibi’s husband over the phone earlier this week.

No idea it would get so bad in Pakistan

Bibi’s husband told Monteduro that although his family has already lived through an unimaginable experience, they had not anticipated that things would get so bad that they would need to go into hiding.

“They [Bibi’s family] are grateful for all the people, for the charities in this moment involved in trying to raise awareness,” he added.

Speculation continues as to whether Bibi will receive asylum in Europe.

On Nov. 7, European Parliament President Antonio Tajani tweeted, “Asia Bibi has left the prison and has been transferred to a safe place! I thank the Pakistani authorities. I look forward meeting her and her family, in the European Parliament as soon as possible.”

A spokesperson for Pakistan’s foreign office said Nov. 8 that there is “no truth” in reports that Bibi had already left Pakistan.

“There is no truth in reports of her leaving the country — it is fake news,” Dr. Mohammad Faisal said at a press briefing.

Pakistan’s blasphemy laws impose strict punishment on those who desecrate the Quran or who defame or insult Muhammad. Pakistan’s state religion is Islam, and around 97 percent of the population is Muslim.

Although the government has never executed a person under the blasphemy law, accusations alone have inspired mob and vigilante violence.

Blasphemy laws are reportedly used to settle scores or to persecute religious minorities; while non-Muslims constitute only three percent of the Pakistani population, 14 percent of blasphemy cases have been levied against them.

Why was Bibi imprisoned?

In 2009, Bibi was accused of making disparaging remarks about the Islamic prophet Muhammad after an argument stemming from a cup of water. Bibi was harvesting berries with other farm workers when she was asked to get water from a well.

Another person saw her drinking water from a cup that had previously been used by Muslims, and informed Bibi that it was not proper for a Christian to use that cup, as she was unclean. An argument ensued, and Bibi was reported to a Muslim cleric five days later for her supposed blasphemy. Bibi and her family were the only Christians in the area, and had faced pressure to convert to Islam.

Sentenced to death by hanging

She was convicted of blasphemy in 2010, and was sentenced to death by hanging. She immediately appealed. Islamic hardliners in Pakistan have called for her execution since her initial conviction.

Since her arrest, Bibi has garnered international support from numerous world leaders calling for her immediate release, including Benedict XVI and Pope Francis. In 2015, Pope Francis met with her daughter and offered prayers.