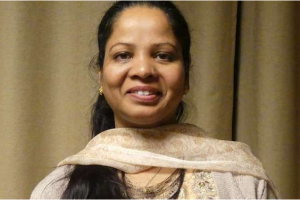 ‘Freed because of Jesus’- Asia Bibi shares her story

Asia Bibi is a Pakistani Catholic woman who was sentenced to death in 2010 for blasphemy against Islam.  After more than eight years in prison, she was acquitted by the Supreme Court of Pakistan in 2018.

“I was accused because of the name of Jesus and I knew I would be freed because of Jesus,” Bibi said at a Paris press conference last week.

Bibi said that during her time on death row, her faith “was always strong because I knew that God was with me, God never leaves you alone, he always accompanies you.”

Together with French journalist Anne-Isabelle Tollet, Bibi has written her autobiography,“Enfin Libre” (Free at Last). The English edition is due out in September.

According to UCA News, Tollet campaigned for Bibi’s release and is the only journalist to interview her in Canada, where Bibi was granted refugee status last year.

Bibi has been living with her husband and two daughters in Canada since last May. Her refugee status is due to expire at the end of this year, and she is seeking political asylum in France, where she met with French president Emmanuel Macron Feb. 28.

Accompanied by her daughter at the press conference, Bibi recounted how the priest who baptized her told her parents that “this little girl will be tested by God.”

“My parents told me that and I knew that something would happen one day,” she said.

During her incarceration, even when she was sentenced to death by hanging, Bibi said she prayed to God for his help to overcome her ordeal.

“If you trust in God, your faith becomes stronger,” she said.

A mother of five, Bibi especially thanked all the people who prayed for her during her years in prison, especially pope emeritus Benedict XVI.

“When my husband came to tell me that His Holiness the Pope prayed for me, I felt really blessed from the bottom of my heart because I knew that was a blessing from God. I was very happy, I don’t have the words to thank him,” she added.

Bibi said one of her greatest desires is to meet Pope Francis.

Asked how her children handled her years in prison, Bibi’s daughter broke into tears.

“Don’t worry, your mom is here,” Bibi consoled her daughter.

“All these people have come to see you, to meet you, to give you their love…smile,” Bibi added.

Bibi also honored the memory of the Minister for Minorities, Shabbaz Batthi, who was assassinated for defending her innocence and opposing the law on blasphemy.

She said she mourned his death very much and that “whoever dies for the truth and for his faith, is always alive, he never dies.”