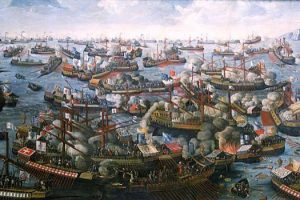 “Lepanto” by G.K. Chesterton sheds more light on the Battle of Lepanto

(Crisis)—On Sunday, October 7th, in the year of Our Lord 1571, an outnumbered, fragile coalition of small Christian states and one small part of a big Christian state defeated an empire at sea just off the coast of Greece. All of Europe rejoiced at the time, even the Christian states that refused help. Now, among the shards and remnants of that civilization which is called the West and extends far beyond Europe, the doubtful heirs reflect upon this event in more diverse and more ambiguous ways. The predominant mode is to ignore it, in the modern sense of acknowledging it on Wikipedia and then rejecting its importance, hand-waving away its unexpectedness, and belittling the idea that Our Lady of the Rosary had anything to do with it. Another approach takes the event seriously as a landmark in the history of warfare, of economics, and of the West, but still leaves Our Lady out in their attempts at explanation.

And finally, there are those who see it as a miracle, and miracles always imply the involvement of our Lady, because she is the greatest miracle of all. G.K. Chesterton’s “Lepanto” is in its own category, set apart from any of these approaches. It does not belittle the importance of the battle. It does not ignore the supernatural. But it stands, so to speak, on the threshold of an acknowledgement of Our Lady; it is a poem about an unexplainable event brought to flower by an untimely knight. It pauses at the unlooked-for, brilliant wonder of the event and does not proceed further. But this wonder is an important and necessary step in itself. It is the kind of wonder that, once arrived at, can only lead to reverence for Our Lady. It is a tribute to knightliness, and a knight means nothing without his lady fair.

It might be helpful to talk about the battle of Lepanto in a broader historical context before discussing the poem itself, if only because the battle must be seen as a real crisis for Europe even to a non-Christian who investigates the event honestly. It is a battle that comprises not only endings but also beginnings. Not all that ended was evil nor all that came out of it good, and appreciating the complexity surrounding the event should not dull but sharpen the appetite for the cosmic drama that it was in essence.

White founts falling in the courts of the sun,
And the Soldan of Byzantium is smiling as they run;
There is laughter like the fountains in that face of all men feared,
It stirs the forest darkness, the darkness of his beard,
It curls the blood-red crescent, the crescent of his lips,
For the inmost sea of all the earth is shaken with his ships.
They have dared the white republics up the capes of Italy,
They have dashed the Adriatic round the Lion of the Sea,
And the Pope has cast his arms abroad for agony and loss,
And called the kings of Christendom for swords about the Cross…

Waged between the Venetian-Spanish Holy League and the Ottoman Empire, the battle of Lepanto was one of the last major encounters between galleys in history and heralded a less chivalric age in naval warfare. After this, sea battles would be decided more on the basis of sails and cannons rather than rowers and ramming. Lepanto hastened this process; the main reason for the Christian victory considering matériel were the six Venetian galleasses, bristling with cannons, which sailed at the forefront of the fleet and reduced many of the Turkish ships to smoking hulks within minutes. To oppose both the elite Turkish janissaries (think Turkish Navy Seals) and the poorly armed masses who manned the Turkish galleys, the Christians were armed with guns produced cheaply and in large quantities. One of the conditions that made room for Christian victory was an emerging system of “getting and spending” that has characterized both the rise of European prosperity and the decline of European piety.

Here one can move on to more uplifting contrasts. For while the whole Turkish army was an army of slaves (even Ali Pasha, the admiral of the fleet, was technically the slave of the Sultan), the Christian navy was mostly composed of free men, many of whom had relatives who had been captured or enslaved by the Turks and who were therefore fighting for their freedom as well as for the Cross.

All this, however, is ultimately beside the point; anything looks possible after it is accomplished, but no one could have predicted what would happen before the battle of Lepanto began. The Christians were outnumbered in ships and in men. Their coalition, consisting of a handful of vessels from the Spanish navy, the double-dealing Venetians who would remake their alliance with the Turks two years hence, and the small Papal armada, was fraught with mutual suspicion. They were up against a Turkish navy that was undefeated in recent history. Material, economic, and social situations can explain why the battle became a rout, but there is no explanation for the initial daring that led up to it. And this is where Chesterton’s poem comes in. This daring was the result of the leadership of . . . Read More>>