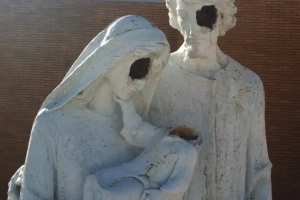 Church Vandalism is Soaring. Here’s Why Everyone Should Care

From senseless violence against formerly honored Saint Junipero Serra statues in California and St. King Louis statues in St. Louis, Missouri, to churches throughout the United States, Canada, Europe, especially in France, and elsewhere. Needless to say, something is very wrong. The Washington Post Op.Ed. below does a good job of addressing why it matters… why we should care—why we MUST—about it… and what we need to do as people of true faith. Well worth the read! —ed., CBJ

These words greeted parishioners and visitors on a recent Sunday morning at the Cathedral Basilica of the Immaculate Conception in Denver. They were spray-painted in blood-red text on the main bronze double doors, with further hateful graffiti, including swastikas, scattered across the cathedral grounds.

Denver residents were shocked to see the defacement of an iconic landmark. But the real shock is this: Archdiocese records show that at least 25 other Catholic parishes and ministry centers in and around Denver have been vandalized, looted, targeted by arson or desecrated in the past 21 months alone. (article continues below 30-second video clip)

The U.S. Conference of Catholic Bishops declared the graffiti at the cathedral to be the 100th incidence of vandalism, arson and destruction of Catholic property nationwide since May of 2020. Yet that number doesn’t include many of the attacks that have been identified in Denver, along with countless similar incidents in other cities and states not reported in the media. You would likely have to go back to the early 20th or late 19th centuries, when an influx of Catholic immigrants challenged a mostly Protestant culture, to find so much public antagonism toward the Catholic Church.

Today, Catholics are far from the only people of faith being attacked. The Mormon Church has reported its own dramatic spike in violence and vandalism of their temples. Numerous African American churches suffered property damage over the past year and a… we highly encourage you to read full article>>