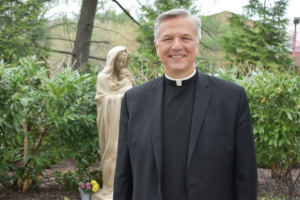 The following is a CNA interview with Fr. Mark Morozowich, a priest for the Ukrainian Catholic Eparchy of St. Josaphat in Parma, Ohio. The Pennsylvania native is currently serving as dean of the School of Theology and Religious Studies at the Catholic University of America in Washington, D.C.

CNA—A Ukrainian Catholic priest who is the dean of theology at the Catholic University of America is urging the faithful to take seriously Pope Francis’ call to pray and fast for peace in Ukraine on Ash Wednesday, the start of the Lenten season.

“People need to join in, to really offer their prayers, because there’s a lot of need,” Father Mark Morozowich told CNA in an interview on Tuesday, March 1.

“I really believe that uniting together through prayer witnesses a strength that I think people thought might have disappeared from even our country,” he added.

Fr. Morozowich told CNA that the crisis in Ukraine is “overwhelming” to contemplate, and he expressed grave concerns for the fate of church leaders caught in the war zone, citing worrisome reports that Russia has compiled “lists” of Ukrainian bishops it sees as potential threats.

Here are edited highlights of the interview conducted by video conference:

How is the war affecting you?

Fr. Mark Morozowich:   I have many close friends in Ukraine. I’ve listened to their stories and heard their problems and their struggles. On one hand, I’m elated by the things that people are doing to care for their brothers and sisters. I have relatives there and they said they’re opening up their school for all the people that are displaced and they’re feeding them. I’ve heard numerous stories of people who are on the road to leave and people are feeding them for free, handing out free food, caring for their brothers and sisters. So, it’s this wonderful witness of people standing up to defend their own territory.

There was this one video of this woman saying “What are you doing here? I was born here. This is my country. I’m not gonna show you my passport. You show me your passport. You are the one who doesn’t belong.”

And then at the same time, I feel helpless. I’m working with our church to get the word out, gathering in prayer, helping to disseminate information publicly. And yet at the same point, I feel powerless. And I want to do more. I want to bring about some healing to bring about an end. And so I’m doing what I can do in the place where I’m at. But it’s just overwhelming.

What is President Vladimir Putin’s motive for invading Ukraine?

Fr. Mark Morozowich:   My ultimate understanding is that he felt that the undermining of Ukraine by the 2014 invasion would put the country into political upheaval and would keep it from developing along lines of true human freedom and respect for the other. He has said many times that the worst thing that happened in the 20th century was the demise of the Soviet Union. So Putin believes that he has the ability to recreate the Soviet Union and to be this bulwark against what he views as threats.

Ultimately, I think that the integration of Ukraine into Europe integrated it more into the world economy. And instead of growing weaker, it grew stronger. And Putin feared for his own way of life in Russia because they could see how their brothers and sisters in Ukraine were doing. And he wondered why Russia wasn’t accelerating at this pace.

If Ukraine falls to Russia, will Putin stop there?

Fr. Mark Morozowich:   I believe that Putin will continue to rebuild the Soviet Union to rebuild a bulwark, a bulwark that would include the former east bloc countries and that he would just continue to wreak his havoc and destruction until he has his might, his right established within a sufficient sphere of influence.

If you could have a meeting with President Putin, what would you tell him?

Fr. Mark Morozowich:   I would tell Mr. Putin, “Immediately cease all of your hostilities. No one in Ukraine wishes you ill. No one in Ukraine has come after you. You have come after the people of Ukraine. This is evil. Stop it immediately. Respect your brothers and sisters. Respect your motherland. This motherland of Kiev and Rus has given life to the people of Russia. Honor your motherland.”

In an interview with CNA, Archbishop Borys Gudziak, the archeparch of the Ukrainian Catholic Archeparchy of Philadelphia, said that the war could call for Catholics to be martyred. Do you agree with this statement?

Fr. Mark Morozowich:   We’ve been under the advisement that all of our bishops are on a list. What that list means, I don’t know. We know that everywhere that the Russian Federation extends its influence, what they did in the Donbas, what they did in Crimea as well was to eliminate the Ukrainian Catholic Church. So what lengths they’ll go to, I don’t know. Certainly, I think the leadership would at least be arrested. It’s just hard to know what and how they would be with that. We have suffered rhetoric in saying that we’re not really a church, that we’re just a sect. We’re not a sect. We are people who are alive with a faith in Jesus Christ that want to live alongside our brothers and sisters. So, yes, I do believe that what our priests, our nuns are subject to could lead to martyrdom.

Putin has said that Ukraine is suffering from infectious ideas. He says the ideas of Uniatism and of the Ukrainian Greek Catholic Church are infectious ideas. That is horrendous and calls for our complete protest. It just really fails to see who we are as a people. This is not something where Putin is acting in the name of Christ in the name of caring for our brothers and sisters.

What is the United State’s role in the war?

Fr. Mark Morozowich:      The United States is one of the signatories of the Budapest Accord. So it has to do all that it can to maintain the territorial integrity of Ukraine. Likewise, the United States is called upon to support and protect the free people of Ukraine who are democratically electing and striving to move forward. So this is not just an assault on a country. This is an assault on the democratic values of the free world.

Fr. Mark Morozowich:     No, the United States can do much more — certainly in terms of humanitarian, but as well as in terms of defense support. The more defensive support that can be given to Ukraine will be an important aspect. Likewise, the economic impact is beginning already after only a few days to take its toll. And I’m heartened to see that even Switzerland, a neutral area, has gotten involved in really putting the pressure. This has got to be felt at every level of Russian society.

What is the role of the Catholic Church in this war, both abroad and on the ground?

Fr. Mark Morozowich:     So, on the ground, first of all, certainly any humanitarian aid that can be provided needs to be provided. But more importantly, it’s the role of prayer. There’s little that we can do to actually go over there. I really believe that uniting together through prayer witnesses a strength that I think people thought might have disappeared from even our country.

On Sunday in the Ukrainian Catholic National Shrine of the Holy Family [in Washington, D.C.], over 300 people gathered at the 9 o’clock liturgy to pray to witness their support. People sent flowers, people sent prayers, and we call upon all Catholics throughout our country, throughout the world, to pray, to fast, especially in solidarity with what Pope Francis asked us to do on Ash Wednesday in the Latin tradition. People need to join in, to really offer their prayers because there’s a lot of need. There’s a lot of help that comes through the spiritual uplifting that we give. So certainly witnessing to our elected officials about the importance of defending our brothers and sisters, about helping those refugees that are pouring out of Ukraine will help too.

Already 500,000 people have poured out [of Ukraine]: women and children in fear, children that cannot sleep. There are numerous places, even children’s hospitals that have been bombed. And so protecting and working with these different organizations that are providing on-the-ground help is important. There are different possibilities of help and outreach to lean on places like Catholic Relief Services that’s working directly with Caritas Ukraine. Seeing what our brothers and sisters in Poland and Slovakia need in immediate assistance to respond to this humanitarian crisis is something we can do as well. All of these things are concrete steps that we can do. Acting at all levels of showing support is integral. Primarily, though, prayer.

What is the answer to stopping the war? Is there a way out of this?

Fr. Mark Morozowich:      I think that the way out of this has got to be based upon the Russian government itself. There are already members of their parliament that have spoken out against this. There has got to be an understanding at every level of Russian society that the whole world denounces this. Certainly the economic crisis that it’s creating, I mean the fall of the ruble where one ruble is now equal to one penny is huge. This will impact every level of the society. Look at the strong statements that governments have put out in isolating Russia. It’s got to ultimately come through a conversion. We pray daily for the conversion of the military leaders. We want to see peaceful change. We want to work with our brothers and sisters in Russia, so that we can live together in a world that is filled with peace and harmony.

How do you feel about some of the apocalyptic fears some have expressed concerning this escalating conflict?

Fr. Mark Morozowich:      I’m concerned. I was very concerned when Putin raised the threat of nuclear war. I think that his inability to recognize what’s happening in Ukraine portends badly. And I think that we all need to be aware of what might happen if he becomes even more unhinged. I doubt that he calculated the swiftness of the economic reprisal against his country. I doubt that he has calculated what his colleagues think. I think it’s striking to see the images when he is meeting with his own cabinet, that they are at least 15 feet away from him. So we have a despot, a tyrannical leader who doesn’t even come close to his own closest advisors. So I’m praying and seeking out God’s guidance so that we have a peaceful resolution so this situation doesn’t escalate.