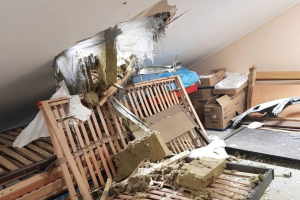 A bomb struck the headquarters of a Catholic diocese on Tuesday in the Ukrainian city of Kharkiv.

Forty people were sheltering in the basement of the diocesan chancery when the bomb landed on March 1, but no injuries were reported, the Italian news agency SIR said.

UKRAINE LATEST 🇺🇦 The building of the Curia of the Roman Catholic diocese of Kharkiv-Zaporozhia was hit by a Russian missile today. Thankfully no one was hurt.

This video received from a priest in Lublin shows a ruined room in the attic.#CatholicTwitter #Ukraine 🙏🏼 pic.twitter.com/03L3ixZUci

A video posted on Twitter by the Latin Mass Society of England and Wales showed debris strewn across the floor of a upper room in the chancery.

Russian forces have advanced on Kharkiv, which has a population of 1.4 million people, since President Vladimir Putin ordered a full-scale invasion of Ukraine on Feb. 24.

According to media reports, the Russian bombardment of the city in northeastern Ukraine has resulted in the deaths of civilians, including children.

Father Gregorio Semenkov, chancellor of the Latin Rite Diocese of Kharkiv-Zaporizhzhia, told SIR: “This morning was hell, the bomb fell on the curia.”

“There were bombings in the city center. The attacks targeted government offices. The bombs also hit the people who were waiting to get bread and just at that moment a bomb fell on the curia.”

“There are many dead. For now, there is no news about the number of victims and wounded. The internet connection is down so we don’t have updated information.”

He added: “In the curia these days there are many people, many mothers with children. We are a total of 40 people. We put them in a safe place. We were all under ground and luckily the bomb hit high up.”

Kharkiv is the second-largest city in Ukraine after the capital, Kyiv. The Latin Rite Diocese of Kharkiv-Zaporizhzhia was created in 2002 and is centered on the Cathedral of the Assumption of the Blessed Virgin Mary in Kharkiv. It is a suffragan diocese of the Archdiocese of Lviv of the Latins in western Ukraine.

The Catholic charity Aid to the Church in Need said on Feb. 28 that Bishop Pavlo Honcharuk, the Latin Rite bishop of Kharkiv-Zaporizhia, has “spent the past days in a bunker with several families, as well as with his Orthodox counterpart.”

The 44-year-old, who has served as a bishop for two years, told the charity: “I wish for this war to end as quickly as possible. But while evil has shown itself to be so strong, this has also exposed a lot of good. In a way, the evil we are experiencing also squeezes the good juice from the grape, and that good juice is our compassion, mutual support, and love. It shows our true faces.”

“My message is short because we are under constant bombardment, and I am a little nervous, but we try to act normally. God bless you!”