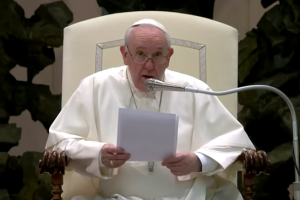 Vatican News (by Tiziana Campisi and Felipe Herrera)—As concerns about the war in Ukraine grow around the world, Cardinals Kurt Koch and Miguel Ángel Ayuso Guixot – presidents respectively of the Pontifical Council for Promoting Christian Unity and of the Pontifical Council for Interreligious Dialogue – joined the appeal for peace launched by the Pope last week. “Jesus taught us that the diabolical senselessness of violence is answered with God’s weapons, with prayer and fasting,”

Pope Francis said at the end of the general audience on 23 February, asking that Ash Wednesday, the beginning of Lent, be a day dedicated to Ukraine, encouraging believers in a special way to pray intensely.

The two dicastery heads emphasized the importance of the Pope’s invitation and urge all Catholics, as well as people of other faiths, to be united in prayer for peace.

“For us Catholics, Ash Wednesday is already a day of prayer and fasting,” said Cardinal Kurt Koch, while pointing out that the Pope has invited everyone – Christians of other churches and all people – to join in this prayer for peace. It is a way of being in solidarity and united, especially because, the cardinal observes, when there is a war people have the often feel powerless and wonder what they can do.

At this time, it is very important to entrust ourselves to God, explained the president of the Pontifical Council for Promoting Christian Unity, because God desires peace, and never war. A public prayer then, Cardinal Koch adds, is an “appeal to the conscience of all those who have power over war and peace,” an invitation to purify their consciences, so that they do not have thoughts of war, but of peace. “

Thirdly, the prayer for peace is a sign of solidarity with all those who are suffering, who are in a very tragic situation, who have to leave their families, their homes,” concluded the cardinal. “Prayer is a sign for these people, because it helps them understand that they are not alone, that there are those who are thinking of them and praying for them.”

Ayuso: religions together to pray

Cardinal Miguel Ángel Ayuso Guixot, for his part, expressed his gratitude to the Pope for asking everyone to pray as members of the human family. The cardinal urged the faithful of different religious traditions to join the Pope’s initiative, emphasizing the importance attached to fasting and prayer by the various religious traditions.

As president of the Pontifical Council for Interreligious Dialogue, he invited the leaders of different communities and religious traditions to join the Day for Ukraine. Cardinal Ayuso Guixot said he hopes that the prayers and fasting of all will contribute to world peace.

Vatican News—During the General Audience last Wednesday (February 23), Pope Francis made a heartfelt appeal for peace in Ukraine, saying that the threat of war had caused “great pain in my heart.”

“Despite the diplomatic efforts of the last few weeks,” the Pope said, “increasingly alarming scenarios are opening up,” with many people all over the world feeling anguish and pain.

“’Once again the peace of all is threatened by partisan interests,” he stressed. Pope Francis appealed to those “with political responsibility to examine their consciences seriously before God, who is the God of peace and not of war, who is the Father of all, not just of some, who wants us to be brothers and not enemies.””

He also prayed that “all the parties involved refrain from any action that would cause even more suffering to the people, destabilizing coexistence between nations and bringing international law into disrepute.”

Prayer and fasting for peace

Speaking at the end of the General Audience, Pope Francis invited everyone to make March 2, Ash Wednesday, a Day of Fasting for Peace.

“I encourage believers in a special way to dedicate themselves intensely to prayer and fasting on that day. May the Queen of Peace preserve the world from the madness of war,” he said.

In a statement, Holy See Press Office Director, Matteo Bruni, said the telephone call took place as dramatic news was coming in from the areas where war is raging and from Kyiv where street fighting has erupted in a battle for the capital.

A tweet from the Ukrainian Embassy to the Holy See said Pope Francis expressed his “most profound pain for the tragic events unfolding in our country.”

“I thanked Pope Francis for praying for peace in Ukraine and a ceasefire. The Ukrainian people feel the spiritual support of His Holiness”.

For the second day in a row that the Pope has used his Twitter account @Pontifex to forcefully affirm his “no to war” in Ukrainian and in Russian:

“Jesus teaches us to respond to the diabolical senseless of violence with God’s weapons: with prayer and fasting. May the Queen of peace preserve the world from the folly of war”.

On Friday (February 25), in a tweet in Ukrainian and in Russian, the Pope recalled a quote from his encyclical Fratelli tutti:

“Every war leaves our world worse than it was before. War is a failure of politics and of humanity, a shameful capitulation, a stinging defeat before the forces of evil”.

The tweets, with the image of the crucified Christ, are accompanied by the #PrayTogether #Ukraine hashtags and they accompany us as we approach the Day of fasting and prayer for peace in Ukraine called for by Pope Francis for 2 March, Ash Wednesday.

The telephone conversation took place the day after the Pope made a 30-minute visit to the Russian embassy to the Holy See to relay his concern for the conflict.

Also on Friday, the Pope called Major Archbishop Sviatoslav Shevchuk, the head of the Ukrainian Greek Catholic Church, asking for news on the situation in Kyiv and in Ukraine and expressing his will to do everything in his power to help. The Pope also thanked the UGCC for its closeness to the people, for its choice to remain with the people, and for having opened up the basement of the Kyiv cathedral as a bomb shelter. He also assured the Major Archbishop of his prayers and offered his apostolic blessing to the suffering Ukrainian people.