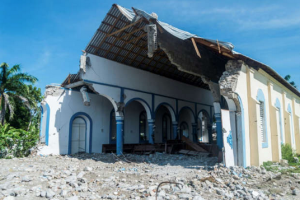 AFP—Its bell tower and yellow walls a sharp contrast with Haiti’s blue tropical sky, the historic Immaculee Conception church was the pride of Les Anglais, until it was destroyed by an earthquake Saturday, burying several faithful inside.
“It was a beautiful church with very beautiful architecture,” said Fr. Wilson Exantus Andre, the parish priest at the Immaculee Conception church in Les Anglais, in southwestern Haiti. 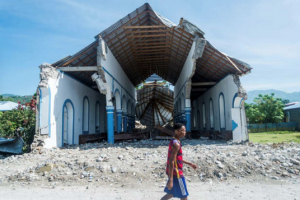 On August 14, at exactly 8:29 am (1229 GMT), a magnitude 7.2 earthquake struck southern Haiti, reducing the church’s facade and steeple to a pile of rubble in seconds.

At least 17 people were crushed to death by the collapsing wall and roof.

“I had just finished celebrating the 6:30 am morning mass and had entered the presbytery to have coffee before returning to celebrate baptisms” when the quake struck, said parish priest Wilson Exantus Andre.

“The oldest of the deceased was 24 years old. What is hard is that a woman who has only two children, 18 years old and 3 years old, lost them both,” the priest, still in shock, told AFP on Monday.

The bodies of all of the victims were pulled out of the ruins of the church.

The massive quake killed more than 1,400 people across Haiti, according to a preliminary official toll reported on Monday.