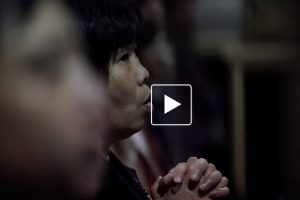 Beijing, China, Oct 26, 2018-(CNA)—As part of an ongoing crackdown on religious practice in the country, Chinese authorities demolished two Catholic Marian shrines this week. The move comes just one month after the Chinese government signed an agreement with the Vatican regarding the appointment of bishops. (short video slideshow here)

According to reports from AsiaNews, government authorities destroyed the Marian shrines of Our Lady of the Seven Sorrows in Dongergou (Shanxi), and Our Lady of Bliss, also known as Our Lady of the Mountain, in Anlong (Guizhou).

Authorities claim that the shrine in Anlong was destroyed because it lacked the necessary building permits. Local Catholics told AsiaNews that they believe the demolitions were part of the so-called “Sinicization” efforts of the Communist Party to bring the Catholic Church more in-line with the government’s understanding of Chinese culture, society and politics.

Last month, the Holy See announced that Pope Francis had signed an agreement with the Chinese government intended to normalize the situation of China’s Catholics.

The Church in China has been split between the “underground” Church, in full communion with Rome, and the state-run Chinese Patriotic Catholic Association (CPCA), loyal to the government and not the Vatican.

The Chinese government appointed bishops of the CPCA, including several illicit consecrations not authorized by Rome.

While the exact parameters of the accord are unknown, the Vatican announced in September that Pope Francis had lifted the excommunication of seven illicitly consecrated bishops after the signing of a provisional deal with the Chinese government.

Two government-sponsored bishops recently attended the synod meeting on young people in Rome. One of them, Bishop Joseph Guo Jincai, was excommunicated by Rome at the time of his appointment in 2010.

Under the terms of the arrangement, Beijing may propose candidates for bishop, but the Pope must give final approval.

The agreement was intended to regularize the situation of the Church in China, moving towards a unification between the underground and state-sponsored branches. The Vatican-China deal, which Rome termed “pastoral” rather than “diplomatic” has been roundly criticized by human rights groups and some Church leaders, including Cardinal Joseph Zen.

Zen, the former bishop of Hong Kong wrote in a column for the New York Times this week that the agreement was a step toward the “annihilation” of the Catholic Church in China.

Videos taken by locals and posted on AsiaNews this week show authorities using cranes to remove statues from the two Marian shrines; in another video jackhammers can be heard demolishing the Our Lady of Bliss shrine.

The demolitions are the latest in a series actions taken against religious sites, which have continued throughout 2018.

In December, a Catholic church in Shaanxi province was completely demolished, despite having previously obtained the necessary legal permits from the Religious Affairs Bureau, according to AsiaNews.

In late February, local government authorities forcibly removed the crosses, statues, and bell towers from a Catholic church, according to a Union of Catholic Asian News report.

In May, human rights group China Aid reported that a Christian church in China’s Henan province had been “completely razed”, and 40 parishioners that tried to stop the destruction were detained.

In early June, the Way of the Cross at the sanctuary of Our Lady of Mount Carmel in China’s Henan province, a popular pilgrimage site for many Catholics, was torn down by local government authorities without any reason given.

In July, government officials bulldozed Liangwang Catholic church in Shandong province, despite the site having recently been given a government permit to operate legally as a church.

The increased action coincides with changes at the level of the national government in the Spring of this year. At the same time that President Xi Jinping removed limits on his term of office, state supervision of the Catholic Church was placed under the Chinese Communist Party.

New regulations on religious practice went into effect in February, including a prohibition on children entering churches.

In September, the Chinese government placed further restrictions on evangelization, making it illegal for any religious prayers, catechesis or preaching to be published online.

While Cardinal Zen condemned the violations of religious freedom in his opinion piece this week, he warned clergy of the underground church against starting a “revolution.”

“They take away your churches? You can no longer officiate? Go home, and pray with your family. Till the soil. Wait for better times. Go back to the catacombs. Communism isn’t eternal.”