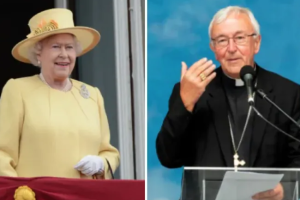 (CNA)—Cardinal Vincent Nichols of Westminster, England, offered prayers for and paid tribute to Queen Elizabeth II, who died Sept. 8 while under medical supervision at Balmoral Castle in Scotland with multiple family members by her side. She was 96.

“On 21 April 1947, on her twenty-first birthday, Princess Elizabeth said, ‘I declare before you all that my whole life whether it be long or short shall be devoted to your service.’ Now, seventy-five years later, we are heartbroken in our loss at her death, and so full of admiration for the unfailing way in which she fulfilled that declaration,” Nichols, president of the Catholic Bishops’ Conference of England and Wales, said in a statement.

“Even in my sorrow, shared with so many around the world, I am filled with an immense sense of gratitude for the gift to the world that has been the life of Queen Elizabeth II.”

The British monarch had been on a summer break at her Scottish home since July, the BBC reported. As of Thursday afternoon, all the queen’s children were traveling to or had arrived at the castle.

Nichols noted that Elizabeth’s deep Christian faith — and her encouragement to others to practice their faith — made her a “shining light” in British history.

“This faith, so often and so eloquently proclaimed in her public messages, has been an inspiration to me, and I am sure to many. The wisdom, stability and service which she consistently embodied, often in circumstances of extreme difficulty, are a shining legacy and testament to her faith.

“Our prayer is that she is now received into the merciful presence of God, there to be reunited with her beloved Prince Philip. This is the promise of our faith, and our deep consolation.

“Queen Elizabeth II will remain, always, a shining light in our history. May she now rest in peace. We pray for His Majesty the King, as he assumes his new office even as he mourns his mother. God save the King,” Nichols concluded.

Buckingham Palace issued a brief — and rare — statement concerning the queen’s health just after noon local time, saying that following an evaluation this morning, the queen’s doctors are “concerned for Her Majesty’s health and have recommended she remain under medical supervision.”

The archbishop of Canterbury, Justin Welby, said: “My prayers, and the prayers of people across the [Church of England] and the nation, are with Her Majesty the Queen today. May God’s presence strengthen and comfort Her Majesty, her family, and those who are caring for her at Balmoral,” reported the BBC. The British monarch is head of the Church of England.

Since her reign began in 1952, Queen Elizabeth has met five popes. In 2010, she welcomed then Pope Benedict XVI to the U.K., the first state visit of a pope to the country. St. John Paul II had visited the U.K. and met with the queen in 1982, but his was a pastoral rather than a state visit.

Benedict later said he retained “warm memories of the gracious welcome” given to him by Queen Elizabeth at the Palace of Holyroodhouse in Edinburgh on the first day of his visit.