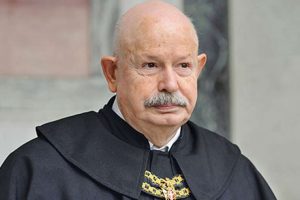 Fra’ Giacomo Dalla Torre was elected Wednesday the 80th Grand Master of the Sovereign Order of Malta, a position usually held for life. Dalla Torre’s predecessor, Matthew Festing, resigned from the position in 2017.

The election took place May 2, and was conducted by the 54 members of the Council Complete of State, the electing body of the order. Pope Francis was informed of the election result by letter.

Dalla Torre has been interim grand master since April 2017. His appointment to that position was part of ongoing reform of leadership after Festing, the Knights’ former grand master, Matthew Festing, resigned on Jan. 24, 2017.

Fra’ Giacomo Dalla Torre will take his oath as Grand Master on May 3, before the pope’s special delegate to the Order of Malta, Archbishop Angelo Becciu, and before the members of the Council Complete of State, in the monastery church of the Priory of the Knights of Malta.

According to a statement from the order, the new grand master will be responsible for continuing reforms of the group’s constitution, which began in 2017, “to adapt it to the development that the Order has experienced in recent decades.”

Dalla Torre’s first official engagement will be to preside over the Order of Malta’s 60th International Pilgrimage to Lourdes May 5-8. The annual pilgrimage includes more than 7,000 members and volunteers from all over the world, including 1,600 sick and disabled pilgrims.

The Sovereign Military Order of Malta is a Catholic lay religious order originally founded as the Knights Hospitaller around 1099 in Jerusalem. Now based in Rome, it is present in 120 countries with more than 2,000 projects in the medical-social field and more than 120,000 volunteers and medical staff.

The grand master is the “sovereign and religious head of the Order,” the news release states, and “is vested with supreme authorities.”

“Together with the Sovereign Council, the Grand Master issues the legislative measures not covered by the constitution, promulgates government acts and ratifies international agreements. The States with which the Order has diplomatic relations recognize the Grand Master with the prerogatives, immunities and honors reserved for Heads of State.”

Dalla Torre was born in Rome in 1944. He holds a degree in philosophy from the University of Rome, with a specialization in Christian Archaeology and Art History.

He has taught courses in Classic Greek at the Pontifical Urbanianum University in Rome and has served as head of the university’s library and chief archivist for important collections.

In 2004, he was elected grand commander, and after the death of the 78th grand master, Fra’ Andrew Bertie, he stood in as interim lieutenant. He served as grand prior of Rome from 2008 to 2017.

He was appointed interim grand master April 29, 2017, after the resignation of Matthew Festing, which marked the end of a month-long back and forth between the Order of Malta and the Holy See, beginning with the forced dismissal of Grand Chancellor Albrecht von Boeselager from both his position and his membership in the order, in early December 2016.