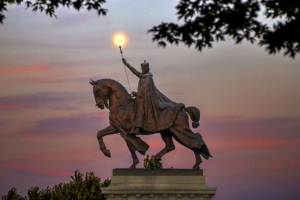 CNA—According to the St. Louis Post-Dispatch, some 200 people were at the protest on Saturday. Catholics defending the statue at the protest prayed the rosary and sang, and several police officers separated them from the protesters.

The Archdiocese of St. Louis on Sunday released a statement defending the city’s namesake, amid calls from activists to tear down a prominent statue of King Louis IX.

“For Catholics, St. Louis is an example of an imperfect man who strived to live a life modeled after the life of Jesus Christ. For St. Louisans, he is a model for how we should care for our fellow citizen, and a namesake with whom we should be proud to identify,” the archdiocese said June 29.

A group of activists on June 27 rallied at the statue, called Apotheosis of St. Louis, which has been a fixture in front of the St. Louis Art Museum for more than a century. Leaders of the protests have called for the statues’ removal because of St. Louis’ “antisemitism [and] Islamophobia.”

Numerous statues of historic figures have been pulled down in recent weeks amid ongoing protests and riots throughout the country.

While some protests have torn down the statues of Confederate figures as part of a call to end systemic racism, other statues have also been torn down from prominent locations, including one of George Washington. Several statues of St. Junipero Serra have been pulled down or protested in California.

St. Louis is the only king of France to have become a canonized saint— Pope Boniface VIII canonized him in 1297. Eighteenth-century French explorers named the new fur trading outpost they founded on the Mississippi river after the saint.

St. Louis took part in the seventh and eighth crusades, during the second of which he died of dysentery.

Louis ardently believed in the crusade’s cause to protect the Holy Land and fought a largely unsuccessful campaign in what is now Egypt from 1249-54.

Upon returning from the crusade, he resolved, according to one biography, “to lead a life as a Christian king worthy of rescuing Jerusalem one day.”

The archdiocese highlighted St. Louis’ care and concern for his subjects, especially the poor— pointing to reforms that he implemented in French government, which focused on impartial justice, protecting the rights of his subjects, steep penalties for royal officials abusing power, and a series of initiatives to help the poor.

St. Louis would feed beggars at his royal table, even washing their feet, and he also founded many hospitals.

Sword held down rather than poised for attack

Archbishop Robert Carlson, in a recent message against racism, had expressed his hope that calls for racial justice across the country would lead people to put aside violent solutions and instead focus on peaceful ones.

He said the statue of St. Louis, with its sword held down rather than poised for attack, is the peaceful symbol that the city needs.

“The Archdiocese of St. Louis is encouraged by the winds of change that are at hand, but believes that this energy of change should be focused on programs and policies that will dismantle racism and create a more equal society for all races and religions,” the statement continued.

“As Catholics, we believe that each person—no matter their race, religion, background or belief—is created in the image and likeness of God. As such, all should be treated with love, respect and dignity. We should not seek to erase history, but recognize and learn from it, while working to create new opportunities for our brothers and sisters.”

A June 26 video showed Father Stephen Schumacher, a priest of the Archdiocese of St. Louis, attempting to dialogue with protestors about St. Louis and his role in the crusades, saying “St. Louis was a man who willed to use his kingship to do good for his people.”