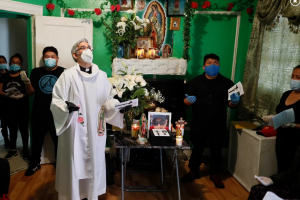 On the Front Lines in New York: One Catholic priest at work

López was hospitalized for COVID-19 on April 3 before succumbing nearly three weeks later. The 39-year-old native of Oaxaca, Mexico, suffered from diabetes which worsened his illness. The day he left for treatment was the last time his wife, Sara Cruz, saw him.

Now López’s family, clad in surgical masks and gloves, was gathered in the widow’s living room in the Corona neighborhood of Queens, New York, around a black box of his cremated remains. A rendering of the Virgin of Guadalupe, patroness of Mexico and the Americas, watched over his ashes on a table beside flowers and prayer candles.

The Rev. Fabian Arias, a Catholic priest from Buenos Aires, Argentina, is the pastor of Iglesia de Sion, a congregation with a mission relationship alongside Saint Peter’s Church in Manhattan, and has performed funeral services 14 times in the last two months. Saturday’s service for López was the first he’s been able to perform in a private residence.

“Ninety-nine percent of funeral homes are not receiving people for religious ceremonies; they say ‘no,’ ” said Arias “They will take your body and provide cremation.”

The financial costs of services, already difficult for working-class families to afford, are compounded by the historic death toll thrusting funeral homes across the city into overcapacity. Most have ended traditional religious services and family gatherings, including cemetery burials.

Taking pains to protect himself from the contagion with personal protective equipment and hand sanitizers, he is led into the… read more>>