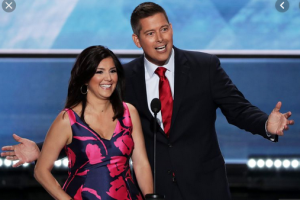 Rep. Sean Duffy (R-WI), a practicing Catholic and—yes, really—a lumberjack champion who has served in Congress since 2011, will be stepping down from his seat on September 23. He made the announcement in a post on his personal Facebook page.

Duffy made the announcement Aug. 26, citing a desire to be with his family ahead of the imminent arrival of his ninth child who has been determined to have a serious heart condition, as the reason he will leave Congress before the end of his term.

“With much prayer, I have decided that this is the right time for me to take a break from public service in order to be the support my wife, baby and family need right now,” he said.

“It is not an easy decision – because I truly love being your Congressman – but it is the right decision for my family, which is my first love and responsibility.”

“God isn’t done with our family yet”

Duffy and his wife, television personality Rachel Campos-Duffy, announced in May that they were expecting their ninth child, saying “God isn’t done with our family yet!” In his Facebook post on Monday, he explained that new family developments, coupled with the difficulty of being in Washington for most of the week, contributed to his decision to quit.

“As you all know, raising a family is hard work. It’s especially true for one as large and busy as mine. Being away from home in Washington four days a week is challenging and for that reason, I have always been open to signs from God when it comes to balancing my desire to serve both my family and my country,” said Duffy.

His ninth child, a girl, is due in late October. In the Facebook post, Duffy explained that they recently learned that she will “need even more love, time, and attention due to complications, including a heart condition.”

Duffy thanked his constituents for “the faith and sacred trust you have put in me all these years,” and said he was especially thankful for the people who have prayed for his family. He encouraged people to continue praying.

“I will miss being your Congressman, but I am also looking forward to having more time with my family, being home for more birthdays and hockey games, and having time to enjoy and care for our new baby girl, who is already so loved by our family,” he said.