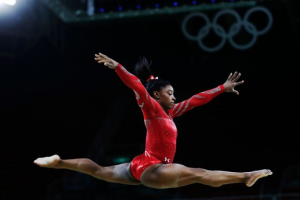 CNA—Although the Tokyo Olympics did not go as planned for Simone Biles, the Catholic 24-year-old gymnast made a triumphant return to competition on Tuesday and will leave Japan with two medals.

Biles had been favored to win as many as five gold medals in Tokyo, but withdrew from four events after revealing that she was suffering from “the twisties.” The twisties refers to a disconnect between a gymnast’s brain and body, and essentially amounts to a random loss of muscle memory.

It was also reported on Tuesday that Biles was dealing with the death of her aunt while in Tokyo.

After returning to competition, Biles won a silver medal in the team competition and a bronze on the balance beam. She is now tied with Shannon Miller for the most Olympic medals ever by an American gymnast.

Simone Biles and her Catholic faith

Biles has spoken about her Catholic faith in the past, and she keeps a rosary in her gymnastics bag and prays prior to competitions. She says she lights a candle to St. Sebastian, the patron saint of athletes, prior to competition.
Her mother, Nellie Biles, was unable to join her in Tokyo this year due to the coronavirus protocols. Nellie kept a supportive presence for her daughter on Twitter, telling her to “be the best Simone.”
On the day of the team final in Rio, Nellie tweeted that she was “wearing out (her) rosary beads.” The day of the vault final, she tweeted that her daughter was “Flying high, even Saint Sebastian is smiling.”

What are “the twisties” for a gymnast?

Biles had told her followers on Instagram that the twisties appeared “randomly” the day after the Olympic qualifying round, and that she “literally can not tell up from down” when twisting in the air. She also shared videos of herself falling on her back while attempting routine uneven bars dismounts.
While Biles had previously experienced the twisties on the floor and vault, in Tokyo she felt them during all four events. She began training privately in a gym in Tokyo in an attempt to get some of her skills back.
In the qualifying round of the Women’s Artistic Gymnastics competition, Biles performed as expected, qualifying for the event finals for each apparatus and winning first place for the all-around final.

Then on the day of the team final on July 27, Biles – a gold medalist and two-time world champion on vault – faltered on her signature apparatus. She performed only one-and-a-half twists instead of the expected two-and-a-half, and nearly crashed into the mat on her landing. She left the arena and returned with the shocking announcement that she would withdraw from the remaining three rounds of the team final.
Biles told reporters that she was not injured, but instead was going to focus on her mental health and would make decisions on the competition day-by-day. This announcement sparked controversy and outcry over her decision to “quit,” but those in the gymnastics community largely rallied behind her.
Biles explained that after her uncharacteristically poor showing on vault, she withdrew from the competition to preserve the team’s chance at a medal of any color.

The United States won a silver medal in the team final. Biles withdrew from the individual all-around, vault, uneven bars, and floor finals, but announced on August 2 that she would be competing in the following day’s balance beam final.
Unlike her other routines, which featured anywhere from two to seven aerial twists, Biles’ balance beam routine did not contain twists aside from the dismount. Instead of competing her usual dismount – either a full-twisting double backward somersault, or a double-twisting double backward somersault, which is known as “The Biles” – she opted for a double backward piked somersault with no twists.
She stuck the landing, and it was good enough for the bronze medal behind favorites Guan Chenchen and Tang Xijing of China. Guan and Tang had qualified for the final in first and second place, respectively, and held those positions.