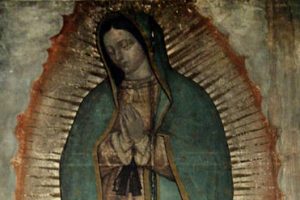 Our Lady of Guadalupe: What ophthamologists discovered in Mary’s eyes

Monastery Icons—In the winter of 1531 the Virgin Mary appeared to Saint Juan Diego, a humble Mexican Indian peasant, instructing him to tell the local bishop of her desire for the construction of a new basilica dedicated to her. Begging for a sign to convince the Bishop, Saint Juan Diego was told to climb to the stony summit of Tepeyac where he would find miraculously blooming roses he was to gather in his mantle (or tilma) and take to the Bishop. Opening his mantle to show the roses, all were astonished to see the Virgin Mary’s colorful portrait miraculously imprinted on the coarse fabric of Saint Juan’s mantle. This tilma has been preserved to this day in the Basilica of Our Lady of Guadalupe in Mexico City. For the full account of the apparition and miracle of the tilma, read The Apparitions of the Blessed Virgin Mary to Saint Juan Diego.

The man in the Virgin’s eyes

In 1929, Alfonso Marcue, the official photographer of the old Basilica of Guadalupe in Mexico City, discovered a clear image of a bearded man reflected in the right eye of the Virgin. He informed the authorities of the Basilica, who told him to keep complete silence about the discovery, which he did.

What the ophthalmologists found

In 1956 ophthalmologist Dr. Rafael Torrija Lavoignet examined the eyes of the Virgin’s image with an ophthalmoscope in great detail. He observed the apparent human figure in the corneas of both eyes, with the location and distortion of a normal human eye and specially noted a unique appearance of the eyes: they look strangely “alive” when examined. Earlier that same year ophthalmologist Dr. Javier Torroella Bueno certified that the images in the Virgin’s eyes are located where they would be in a living human eye, and that the distortion of the images agree with the curvature of the cornea.

A “miraculous painting”? Or a “heavenly photograph”?

In 1979, when working with digitized high-resolution images of the tilma magnified 2,500 times, Dr. Jose Aste Tonsmann discovered that in addition to the human bust others had seen previously, other human figures were reflected in the Virgin’s eyes — a total of thirteen people. The same people are present in both the left and right eyes, in different proportions, as would happen when…. Read more>>