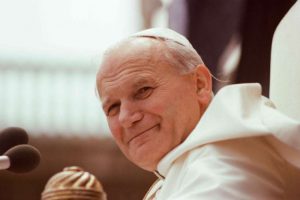 The Polish Bishops’ Conference has asked Pope Francis to name St. John Paul II a patron of Europe and doctor of the Church.

Archbishop Stanislaw Gadecki of Poznan, president of the Polish Bishops Conference, sent the request to the pope on Oct. 22 – the feast day of John Paul II.

“The pontificate of the Pope from Poland was filled with groundbreaking decisions and significant events that changed the face of the papacy and influenced the course of European and world history,” he said, according to Zenit.

Cardinal Stanislaw Dziwisz, former archbishop of Krakow and a close friend of John Paul II, supported the request during a conference held by the “Europa Christi” movement, which took place at the Cardinal Stefan Wyszyński University in Warsaw from Oct. 19-23.

“Pope Wojtyla’s legacy is a rich, versatile and creative synthesis of multiple paths of human thinking. There is no doubt that it still remains, and will for a long time remain, an important and comprehensive cultural renewal project on a global scale,” Dziwisz said, according to Zenit.

Gadecki said the pontificate of John Paul II was heavily influenced by his rich personality, which possessed a strong love for poetics, philosophy, theology, and mysticism.

He added that John Paul II was an example of holiness and leadership, similar to other patron saints of Europe, like Saints Cyril and Methodius. He said John Paul II, who was pope from 1978 to 2005, experienced the fall of the Iron Curtain and played an important role in the unification of Europe.

“After the unifying and culture-making proclamation of the Gospel by Saints Cyril and Methodius and Saint Adalbert, more than a thousand years later, the fruits of their activities – not only in social but also in religious terms – found their protector and continuator in the person of the Polish Pope,” he said, according to the Catholic Herald.

Modern and yet Classical

Dziwisz described the former pope as both modern and classical. Through this balance of tradition and modernity, he said, the saint brought “a huge breath of fresh air to the life of the Church, and through it to the wider universal spaces of broadly understood culture, politics, and science,” the Catholic Herald reported.

“In this regard, the Holy Pope became a real teacher and Doctor of the Church and in it an important guardian of European values, which are the indelible foundation of modern civilization.”

Dziwisz said that John Paull II contributed to not only Christians but non-believers as well. He emphasized the importance of John Paul II’s intercession, especially as the Church and world face difficult times.

“In such difficult and complex times like ours, his intercession with God, which was so beautifully assured by Cardinal Ratzinger at the funeral homily constitutes strong support to all the people of goodwill, and the legacy that he left behind in his writings is the full roadmap outlining good directions for our common journey towards a better world,” he said, according to Zenit.