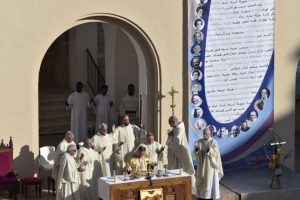 A cardinal dispatched by the Vatican to Algeria has held an unusual beatification ceremony for 19 monks, nuns and other Roman Catholics who were killed during Algeria’s civil war in the 1990s.

The ceremony, on Saturday in the western city of Oran, was the first in the Muslim world, according to Algeria’s religious affairs minister.

It came after Pope Francis recognized all 19 as martyrs in January, paving the way for the ceremony. Beatification is a step in the process of being declared a saint.

The cardinal, Angelo Becciu, who is prefect of the Congregation for the Causes of Saints, celebrated Mass at the Notre Dame de Santa Cruz basilica as the pope’s special envoy.

Bishop Pierre Claverie and his 18 companions, who were martyred in Algeria between 1994 and 1996, were beatified Saturday during a Mass in Oran.

AFP reported that some 1,200 people attended the Dec. 8 ceremony at the Shrine of Our Lady of the Holy Cross. Among them were relatives and friends of the beatified. The beatification was celebrated by Cardinal Giovanni Angelo Becciu, prefect of the Congregation for the Causes of Saints.

Blessed Claverie and his companions were killed during the Algerian Civil War by Islamists.

Archbishop Paul Desfarges of Algiers noted the “thousands of victims of the Algerian civil war,” calling them anonymous heroes.

“We did not want a beatification between Christians, because these brothers and sisters died among tens and tens of thousands of Algerian” Muslims, he stated.

Relatives of those beatified were received by Muslim dignitaries at the Ibn Badis Grand Mosque, where Mostapha Jaber, an imam, said, “We Muslims associate this event with much joy.”

“These Christian martyrs killed during this national tragedy … had a good mission — (they were) determined to spread peace.”

The pope had authorized the Congregation for the Causes of Saints to recognize the martyrdoms in January.

Blessed Claverie was a French Algerian, and Bishop of Oran from 1981 until his Aug. 1, 1996 martyrdom.

The best known of Bl. Claverie’s companions are the seven monks of Tibhirine, who were kidnapped from their Trappist priory in March 1996. They were kept as a bartering chip to procure the release of several imprisoned members of the Armed Islamic Group of Algeria, and were killed in May. Their story was dramatized in the 2010 French film Of Gods and Men, which won the Grand Prix at the Cannes Film Festival.

After the death of the monks of Tibhirine, Claverie knew his life was in serious danger. A bomb exploded at the entrance of his chancery Aug. 1, 1996, killing him and an aide, Mohamed Bouchikhi.

In a pastoral letter last month, Bishop Desfarges called the beatification “a grace for our Church,” urging the local Church “to love as they did in the freedom that the Holy Spirit gives” because the martyrs “go before us on the path of witness that our Church is called to give in this land of Algeria, which from the first century has been watered with the blood of the martyrs.”

Archbishop Desfarges said that the martyrs’ lives “were given to God and to the people to whom love had united them.” He encouraged the faithful to pray to them “asking for the grace of fidelity for our Church in its mission.”

Finally, the Archbishop of Algiers invited the faithful to live this “time of witnessing” through interreligious dialogue.

“The witness of the Catholic Church is not a witness against another’s religion, but a witness that the love of Christ poured out in our hearts calls us to live a love for everyone, without distinction, even enemies,” he concluded.