Practical Resource for Dead Car Battery in the Middle of Nowhere…

This isn’t the typical story you’d see in Catholic Business Journal, but I thought I’d share it anyway because many of us travel where ever the job or a client takes us… and ya just never know if you (or someone you encounter) will be waylaid by a dead battery.  It happened to me today, in a store parking lot, having just loaded the trunk with requested groceries for friends quarantined at home with covid.

It was hot. I was concerned about how long some of the grocery items would stay good in the trunk. And, end-of-day traffic was increasing.  Not the best timing for a defunct battery!

In addition, I couldn’t find my jumper cables, and no one who I asked for help had cables either.  I called AAA and worked my way through the frustrating AI “emergency service” processing system, wondering what would happen if a member in trouble didn’t have a smart phone… or if they were in dire circumstances that made punching in numbers on a cell phone difficult… or dangerous.  I tried to supress rising frustration at the impersonal world in which we seem to live now, where “customer service” and “call us in emergency” does not involve a HUMAN (remember those?) answering a phone call. My oft repeated mantra of the moment: “It is what it is, move forward.”

The hero, and my practical emergency recommendation

While on hold with AAA, a lady walked by and made a quick comment, which led to me responding that my battery had died while I was in the store. A kind man who happened to be nearby overheard the dilemma and popped over to offer help.

But the weird thing is that, while he had confidence in recharging the battery, he was not holding jumper cables.  Instead, he held a small 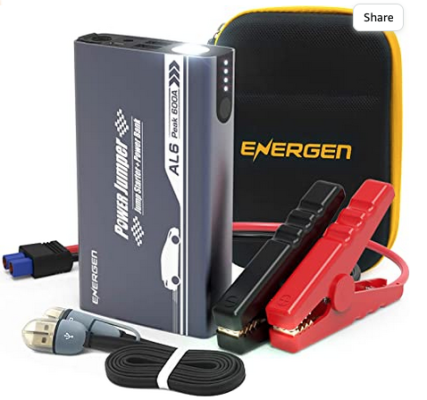 handbag-sized, zippered and fairly flat case that contained a compact, hand-held charger unit with two cable connectors on short tethers.  He connected the end points to the battery—red on red and black to black.  Then he told me to start the car.   It worked!  IT WORKED! Presto!!  (not a hiccup or beep from AAA during this entire episode… I was still on hold.)

This hero told me he’d had that charger in his car for ONE YEAR—unused—and he was as delighted as I was that it worked, no problem!

After profuse thanks, I got onto the freeway and dropped off the groceries. As soon I returned to the office, I opened up Amazon, found the handy charger unit (I had taken a photo of the man’s unit) and ordered one.

I felt it was such an useful product in case of emergency that I’d let you know about it.  After all, who would expect a car to die while in a store?!.. or maybe you or your son or daughter, or older parent or loved one, accidentally left a door ajar or the car lights on. … and maybe they were outside cell phone coverage or … the possibilities are endless.

So, if you are interested, here is a link to the product I ordered —exactly what my parking lot hero used: https://amzn.to/3EsBEd5