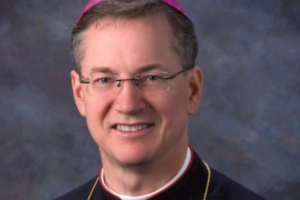 Bishop Paul Sirba of the Diocese of Duluth, Minnesota died on Sunday, after suffering a heart attack before offering Mass. He was 59 years old.

“It is with an incredibly heavy heart that I must inform you of tragic news regarding our Bishop,” said a Dec. 1 statement from Fr. James B. Bissonette, who had been the diocesan vicar general until the bishop’s death. The office of the vicar general ceases upon the death of the diocesan bishop.

“Words do not adequately express our sorrow at this sudden loss of our Shepherd,” Bissonette said.

Bissonette’s statement was distributed to clergy throughout the diocese and was read after Masses on Sunday.

Sirba went into cardiac arrest Sunday at St. Rose Church in Proctor, Minnesota, and was immediately rushed to a hospital, where attempts to revive him were unsuccessful. He received last rites from Fr. John Petrich, a hospital and prison chaplain in the diocese, and was pronounced dead shortly after 9 a.m. on Sunday.

Shock is tangible and profound, yet does not dim his beautiful life

Sirba was reportedly preparing for Mass when he fell ill.

“We have great hope and faith in Bishop Sirba’s resurrection to new life, and have confident assurance that he will hear the words of our Lord, ‘Well done, good and faithful servant, enter in the joy of your master,’” Bissonette’s statement added.

Funeral arrangements have not yet been made. Sirba is survived by his mother, three siblings, and their families. His brother, Fr. Joseph Sirba, is a priest of the Diocese of Duluth.

Sirba, a native of the Twin Cities, was ordained a priest in 1986 at the age of 25, and consecrated as a bishop in 2009. Sirba was just 13 days away from the 10th anniversary of his episcopal consecration.

Before he became the ninth bishop of Duluth, Sirba was a priest of the Archdiocese of Saint Paul and Minneapolis. From 2006 until 2009, he was the director of spiritual formation at the Saint Paul Seminary in Saint Paul.

Catholics in Minnesota and beyond expressed disbelief and grief at Sirba’s sudden passing.

“The Archdiocese of St Paul & Minneapolis grieves with the Diocese of Duluth over the passing of their beloved shepherd, Bishop Paul Sirba, recalling his many years of joyful service as a son of this local Church.  May he rest in peace,” tweeted Archbishop Bernard Hebda of Saint Paul and Minneapolis.

Archbishop Samuel Aquila of Denver told CNA Sunday morning that the bishop’s death was “tragic,” noting that Sirba was “a really good and holy bishop.”

Fr. Scott Jablonski, a priest of the Diocese of Madison who knew Sirba from seminary, said that his passing was “heartbreaking news” for the diocese, and remembered him fondly.

“Bishop Sirba was my spiritual director during my first two years of seminary in St. Paul, including that first year when my father died after a battle with cancer,” said Jablonski. “Bishop Sirba was a very good priest and he helped me tremendously. He will be deeply missed.”

The Diocese of Crookston, which is located in northwestern Minnesota, directly bordering the Diocese of Duluth, tweeted that “Our hearts are with the faithful of the Duluth Diocese as they have lost their shepherd, Bishop Paul Sirba, very suddenly today as a result of cardiac arrest. May he rest in the peace of Christ.”

Fr. John Zuhlsdorf, a priest and blogger, wrote that he had known Sirba since the 80s and the two were friends.

“Paul was prayerful and gracious and real gentlemen, a priests’ priest,” wrote Zuhlsdorf on his blog. “I have it on good authority that he was an exceptional confessor and spiritual director as a priest.  And he played a heck of (a) good game of ping pong.”

The Minnesota Catholic Conference mourned Sirba as someone who was “a holy man who shone with the serenity of faith and the joy of Jesus in everything he did.”

“We will miss him dearly,” the conference wrote.