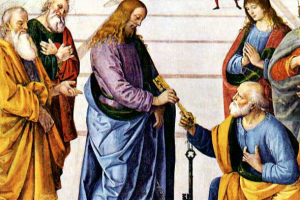 Everything you need to know about Purgatory, Indulgences and Praying for the Dead

Culling directly from the Catechism of the Catholic Church and other documents, Wikipedia authors explain as follows: The Catholic Church holds that “all who die in God’s grace and friendship but still imperfectly purified” undergo the process of purification which the Church calls purgatory, “so as to achieve the holiness necessary to enter the joy of heaven”. It has formulated this doctrine by reference to biblical verses that speak of purifying fire (1 Corinthians 3:15 and 1 Peter 1:7) and to the mention by Jesus of forgiveness in the age to come (Matthew 12:32). It bases its teaching also on the practice of praying for the dead in use within the Church ever since the Church began and which is mentioned even earlier in 2 Macc 12:46.[5][6]

ChurchPop summarizes: The Catholic Church teaches that a soul will go to one of three places upon death: hell, heaven, or purgatory. The first two places are permanent. Once you get to heaven or hell, there is no getting out.

Purgatory, on the other hand, is temporary. It is a state for those who die in Christ, and so are assured of heaven, but who aren’t entirely purified of their attachments to sin. Purgatory is a place of painful purging (hence the name) of attachment to sin with the grace of Jesus, after which the soul enters heaven. Catholics are called to pray for souls in purgatory to lessen their suffering and get them to heaven faster.

The Catholic Business Journal underscores: Those in Purgatory are assured of Heaven, which means these souls are sustained in hope. That said, many saints have had visions of Purgatory and have written of its excruciating suffering, including the extreme suffering of separation from the Lord and Heaven.

Why do we need release from temporal suffering of our sins since our sins are already forgiven in the Sacrament of Confession / Reconciliation?

In this day and age we seem to forget that the sins we commit have temporal consequences as well as spiritual.

As an example, a bank robber may genuinely seek forgiveness in the Sacrament of Confession for his sin of robbing a bank. He will be forgiven by God and the priest will administer absolution, but it may be contingent on the robber making full or as-much-as-he-can restitution. Yup, the robber must return all (or as much as he can) of the stolen money. He must make temporal restitution for his sin.

God is merciful and just. It is his nature. He cannot be anything else. Yet, while mercy far exceeds justice, it does not eliminate justice.

When we sin, there are temporal consequences that we need to repair, so to speak. That’s why the priest gives us an act of penance after our Confession / Reconciliation.

When a person dies, we don’t know whether that person—as wonderful as they were on earth—confessed all his sins, made all the temporal recompense to satisfy justice. Only God knows.
That’s why it is so important that we pray for the departed and, as an extra boost or help to the departed, God allows us to help them get to Heaven faster through obtaining indulgence(s) for their souls.

What is an Indulgence?

An indulgence is “the remission before God of the temporal punishment due sins already forgiven as far as their guilt is concerned.” – Apostolic Constitution of Pope Paul VI, Indulgentiarum Doctrina, whereby the revision of Sacred Indulgences is promulgated

In other words, an indulgence removes either all or part of the temporal punishment that a soul must endure in Purgatory before entering Heaven.

Why should we pray for the dead?

Praying for others, especially praying for the dead, who an no longer pray for themselves, is really important.

Once dead, a person can no longer prayer for himself or herself. No exceptions.

While it might be fairly evident that a person is headed for Heaven after death, you and I don’t know for certain whether any person — even your beloved, saintly Aunt Matilda — will need to pass through Purgatory before entering Heaven.  We can’t know if there are any residual vestiges of sin in her soul that require temporal restitution.  Only God knows. That’s why we pray.

See other questions regarding the reality of Purgatory (regardless of whether or not you personally believe in it) and the power granted us in the mercy of God to obtain Indulgences for ourselves and the deceased. We are, after all, one body in Christ.

What is the difference between a Plenary and a Partial Indulgence?

“An indulgence is either full (Plenary) or Partial according as it removes either all or part of the temporal punishment due to sin.” (Indulgentiarum Doctrina, by Apostolic Constitution of Pope Paul VI)

The Church prescribes the conditions—that is, what we have to do—to obtain a Plenary or Partial indulgence.

This is, to me, the most amazing part: A Plenary Indulgence can wipe away ALL temporal punishment due to sin.

This means, for example, if you do what is prescribed by the Church and accurately fulfill all the obligations required to obtain a Plenary Indulgence for your beloved mother who passed away, then all of the temporal punishment she would have had to suffer in Purgatory for her sins are immediately “deleted” and she will be able to pass directly into Heaven to be with Our Lord and no longer suffering. WOW!

Is there a document or something that lists all the ways we can obtain indulgences?

How to Gain a Plenary Indulgence for the Souls in Purgatory?

As a practicing Catholic, you can gain special indulgences for the faithful departed any time, but especially during the first eight days of November.

The latest edition of the Manual of Indulgences explains as follows:

1. A plenary indulgence, applicable only to the souls in purgatory, is granted to the faithful who,

1. on any and each day from November 1 to 8, devoutly visit a cemetery and pray, if only mentally, for the departed;

2. on All Souls’ Day (or, according to the judgment of the ordinary, on the Sunday preceding or following it, or on the solemnity of All Saints), devoutly visit a church or an oratory and recite an Our Father and the Creed.

Catholics can also gain a partial indulgence throughout the rest of the year:

2. A partial indulgence, applicable only to the souls in purgatory, is granted to the faithful who

1. devoutly visit a cemetery and at least mentally pray for the dead;

2. devoutly recite lauds or vespers from the Office of the Dead or the prayer Eternal rest

The “Eternal rest” prayer, or “Requiem aeternam” is:

“Eternal rest grant to him, O Lord; and let light perpetual shine upon him. May his soul, and the souls of all the faithful departed, through the mercy of God, rest in peace..”

The conditions for gaining an indulgence are as follows:

Karen A. Walker., M.A., is the principal founder of Catholic Business Journal, a published ghost author of three business books, a seasoned and award-nominated journalist and editor, a seasoned and award-winning public relations director. She is a graduate of Thomas Aquinas College, received a Master’s in Philosophy at Laval University, and studied under Raul Deju to complete an intense course in Entrepreneurial Leadership at JFK University, among other practical learnings.