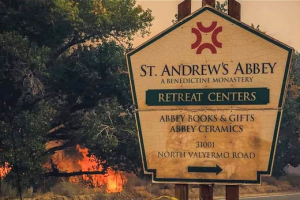 Desert Benedictine Monastery spared from raging fire; “like the parting of the Red Sea”… but still needs help

Having been on several retreats and visits to St. Andrew’s Abbey years ago—all wonderful, it was with horror and gratitude that I learned of the Abbey’s recent narrow escape from earthly hell; namely, yet another devastating wildfire.

This uniquely historic Benedictine monastery is nestled in California’s Mojave Desert, in Valyermo, an unincorporated location of 450 people, a little more than an hour drive from Los Angeles.

St. Andrew Abbey monks were evacuated on Thursday, September 17, due to the raging Bobcat fire. So far the Abbey has been spared, though many not far away lost homes and more.

“The fire literally went around (the monastery),” Abbot Damien reported to Our Sunday Visitor. “The abbey proper, the main buildings are still intact, according to the pictures I’ve seen. I thought to myself, ‘It’s like the parting of the Red Sea.’ The fire just went around.”

Yes, the abbey was spared, but it remains off-limits to the community of 20 Benedictine monks who call the monastery home. Electrical infrastructure in the area was destroyed. It will take several weeks to restore power.

St. Andrew’s, as all Benedictine monasteries, survives by the generosity of donors and by the works of the hands of the monks. Their motto: Ora et Labora (Pray and Work).

I know that the monks at St. Andrew’s have long struggled financially, so any extra help now would mean a lot to them and would be put to immediate good use!

The monastery is a haven for many stressed out laity in Los Angeles, San Bernadino and Orange counties, now including those who soon will be faced with rebuilding their lives after devastating fires.

The Bobcat fire has burned and is still threatening to destroy homes and other structures in Valyermo. For now, at least, the fire is no longer threatening the Benedictine monastery.

“God in his mercy saved the abbey for whatever reason. But I can’t answer why other people’s homes have burned to the ground,” said Father Damien, who described the events of recent days as a “life-teaching moment where we get another perspective on the most important things in life.”

God led these monks from China to the Mohave Desert

The monastery has a uniquely interesting history, having been originally founded in China. Established in 1929 by a famous Belgium Abbey, the St. Benedict’s Priory of Chengtu, China, had grown to run a diocesan major seminary, a China-recognized school for non-Catholic students, and—shortly after the end of WWII—the Institute of Western and Cultural Studies.

The Institute alone housed a library of 10,000 books.

But everything came to an abrupt halt when the Communists took over the city of Chengtu on Christmas Day, 1949.  Literally everything the monks had built was dissolved, confiscated or destroyed and the monks themselves put under house arrest.

Three very difficult years later, the monks were expelled from Communist China, in 1952.

Two years later, in 1954, the parent Abbey of St. Andre in Belgium decided to transfer the Priory to Southern California. The Cardinal-Archbishop of Los Angeles at the time, His Eminence James Francis Cardinal McIntyre, authorized the Abbey’s establishment in the Archdiocese.  The monks transformed what was then Hidden Springs Ranch in Valyermo into a a chapel, monks’ living quarters, a guest house and more, where the Abbey remains today.

Now, in 2020, the structures, especially the monks quarters, have been quietly in need of repair for years, covid-19 has shutdown retreats and kept laity at bay.  Now the Bobcat fire.  That’s why I know help would mean a lot to them right now.