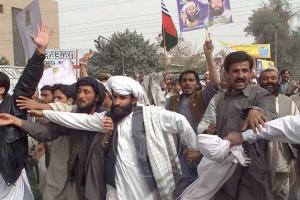 To Where will Afghans flee?

As the USAF C-17 managed to depart from Afghanistan with at least 640 Afghans on board and two who sadly met their death as they fell off the outside of the plane as it took off, one wonders where that plane will land.  To where will Afghans flee?

With president Biden stating that “This did unfold more quickly than we anticipated,” one wonders how thoroughly his plan to pull 1900 troops from Afghanistan was vetted. As the withdrawal was announced, he had ordered an additional 7,000 troops to help in evacuation.

And, where are those evacuated to be sent?   After all, aside from covid-19 worries, there are extreme security risks.


Fort Bliss, in Texas, and Fort McCoy, in Wisconsin, have been confirmed by the Pentagon as two sites readying to receive the refuges, as reported by Cedric Manwaring in UK-based Sunday Vision:

The Pentagon confirmed that the Department of Defense is preparing to host thousands of Afghan refugees at the Fort Bliss facility in Texas as well as at Fort McCoy, Wisconsin.

According to the department, thousands of US citizens who have resided in Afghanistan, as well as local employees of the US mission in Kabul, their families and other “particularly vulnerable” Afghan nationals will be moved out of the country.

He confirmed that they will also evacuate thousands of Afghans who are eligible for special immigrant visas from the United States.

For all categories, Afghans who have passed security screening will continue to be transferred directly to the United States. We will find additional sites for

Apparently loose, provisional arrangements were also made with Kosovo, although it is unclear whether Kosovo’s welcome mat is extended merely to a “symbolic number” of Afghan refugees.  And only until these refugees are transported to the U.S.

As reported by Leland Griffith in the U.K.-based Sunday Vision:

Belgrade, August 16 (EFE). – Part of the Afghans who helped US forces in Afghanistan and whom Washington wants to expel from the country because they consider that their lives will be in danger if they fall into the hands of the Taliban, Koha daily Koha reported on Monday that asylum is first and temporary to Kosovo.

“The (Kosovo) door is not closed to those who have been forced to leave their homes without guilt on their part, to avoid persecution and save lives,” the newspaper quoted the head of the Balkan state, Vuza Osmani, as saying. Newspaper.

The President of the Balkan state indicated that it was a humanitarian operation that was launched at the request of Washington to receive these Afghans without delay.

Osmani did not specify how many refugees would remain on Kosovo’s territory until they could go into exile in the United States.

He pointed out that a “working group” was formed to organize the reception of these people in cooperation with the US authorities.

The president revealed that Washington’s request for Pristina came in mid-July, but it was not announced at the time for security reasons.

Security expert Noureddine Ibichi warned of the danger of terrorists infiltrating the refugee group, and called on his country of 1.8 million to accept only a “symbolic number” of Afghans.