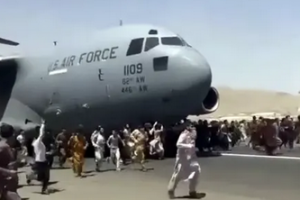 Taliban forges ahead with Afghanistan take over, Russia and China watch and plot in the wings

ObserverDesk—In the meantime, while the withdrawal is taking place, Taliban has already seized the country’s half of the 34 provincial capitals of the country, including Kandahar and Herat. And they were last reported to be in Logar, which is only a few miles away from Kabul.

The former President, Donald Trump is furious over this “Tragic mess in Afghanistan,” and the mishandling of Biden’s administration, while the Republicans call this, Biden’s Saigon movement. Comparing it with the Saigon Embassy’s humiliating and chaotic evacuation in 1975.

Since the Biden administration’s announcement to withdraw all the troops from Afghanistan by 31st August, Taliban has advanced rapidly taking district after district.

Communist China and Russia eager to expand their interests in Afghanistan, by any means possible

The President is to be commended for the clarity of purpose of his statement on Afghanistan and his action. The Taliban must know the world is watching its actions. We are concerned about reports regarding the Taliban’s brutal treatment of all Afghans, especially women and girls

How dare you call for Biden to be commended as Americans are fleeing for their lives right now while the Kabul airport is under fire.

You should be ashamed of yourself.