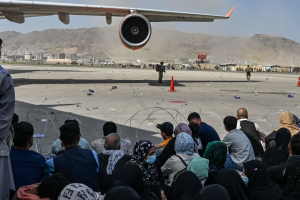 I’m a woman journalist who has lived in Afghanistan for eight years. Now I’m helping evacuate citizens, and the horror show I’ve witnessed will stay with me for life.

…I am talking to Afghans from all over the country who are sharing terrifying stories of what the Taliban are doing in their cities. In Kandahar, they are executing people who they see as opposition on the streets.

In Takhar and Samangan, they have cut off the limbs of those who they accused of being “thieves.”

In Herat, they have already stopped women from entering universities. In some northern provinces, women tell me that the Taliban are collecting names of unmarried and widowed women over 20.

In some districts, they have already been forcefully marrying women off. In other places, they are going door to door, identifying people who have worked with foreigners or in the media….

By abandoning Afghans to the Taliban, the western government has essentially espoused every value that the militant group stands for. The international community, particularly western nations, and specifically the U.S., are party to the war crimes they are committing because they are committing them and the international community endorsed it.
Afghans in the former government and security sector, all of whom are on the run right now, were told their allies had their back. Every single one I spoke to shared that they feel betrayed. Even at the very end, they were told that an interim government would be placed that would protect their interests, and then on Sunday afternoon, they were asked to surrender.
…. In the last three days, my colleagues and I have worked non-stop to get Afghans out. We are calling, emailing, and texting all organizations, activists, lawyers, politicians, and diplomats who can help evacuate vulnerable Afghans from the ground. We are filling out the complicated bureaucratic forms that the governments have created to decide who is eligible to live and who should be left behind. We are trying to put pressure on governments that seem to have just given up.
But we weren’t given enough time. No one expected that American leaders would enable such grave violations against an …   Read more>>  (note: the title of article is different, but it is a continuation of this piece)