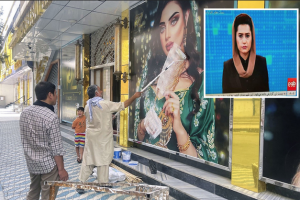 The Sun—TALIBAN death squads have reportedly marked the doors of prominent Afghan women with paint as several female anchors are axed from TV in a chilling crackdown.

Female journalists in Afghanistan are fearing for their lives and many have been “taken off air” as the Taliban’s reign of terror begins after the jihadi army seized Kabul.

Homira Rezai, who grew up in the war-torn country until she was 13 and now lives in Dudley, described how the militants were already drawing up lists of women to target for future punishments.

She told BBC Women’s Hour: “Just an hour ago, I received an update from Kabul where they are going house to house searching for women who were activists, women who were bloggers, YouTubers, any women who had a role in the development of civil society in Afghanistan.

“They are going door to door targeting those women and marking the doors with bright pink or bright-coloured paint to ensure ‘this is the house we need to come back to and do something about …. read more>>